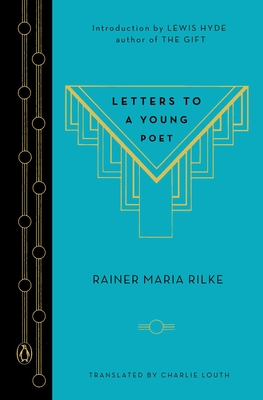 Letters to a Young Poet (A Penguin Classics Hardcover)

At the start of the twentieth century, Rainer Maria Rilke wrote a series of letters to a young officer cadet, advising him on writing, love, sex, suffering, and the nature of advice itself. These profound and lyrical letters have since become hugely influential for generations of writers and artists of all kinds, including Lady Gaga and Patti Smith. With honesty, elegance, and a deep understanding of the loneliness that often comes with being an artist, Rilke's letters are an endless source of inspiration and comfort. Lewis Hyde's new introduction explores the context in which these letters were written and how the author embraced his isolation as a creative force.

This edition also includes Rilke's later work The Letter from the Young Worker.


Praise For Letters to a Young Poet (A Penguin Classics Hardcover)…

“For this reason, my dear Sir, the only advice I have is this: to go into yourself and to examine the depths from which your life springs; at its source you will find the answer to the question of whether you have to write. Accept this answer as it is,without seeking to interpret it. Perhaps it will turn out that you are called to be an artist. Then assume this fate and bear it, its burden and its greatness, without ever asking after the rewards that may come from outside. For he who creates must be a world of his own and find everything within himself and in the natural world that he has elected to follow. [. . .] Whatever happens, your life will find its own paths from that point on, and that they may be good, productive and far-reaching is something I wish for you more than I can say.” —Rainer Maria Rilke

“I cannot think of a better book to put into the hands of any young would-be poet, as an inspirational guide to poetry and to surviving as a poet in a hostile world.”
—Harry Fainlight, The Times (London)

“I read Rilke’s Letters to a Young Poet every day.”
—Lady Gaga

Rainer Maria Rilke (1875–1926) studied literature, art history, and philosophy in both Munich and Prague and is often considered one of the German language's greatest twentieth-century poets. His two most famous verse sequences are the Sonnets to Orpheus and the Duino Elegies; his two most famous prose works are Letters to a Young Poet and the semiautobiographical The Notebooks of Malte Laurids Brigge.

Charlie Louth is a fellow at Queen's College, Oxford, where he lectures in German. He is the author of Hölderlin and the Dynamics of Translation.

Lewis Hyde is the author of the hundred-million-copy bestseller The Gift. A MacArthur fellow and former director of undergraduate creative writing at Harvard University, Hyde is a fellow at Harvard's Berkman Center for Internet and Society. He lives in Cambridge, Massachusetts, and Gambier, Ohio.