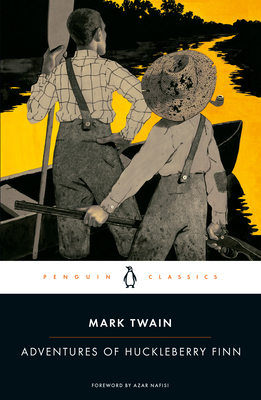 The classic boyhood adventure tale, updated with a new introduction by noted Mark Twain scholar R. Kent Rasmussen and a foreword by Azar Nafisi, author of Reading Lolita in Tehran and The Republic of Imagination

In recent years, neither the persistent effort to “clean up” the racial epithets in Mark Twain’s Adventures of Huckleberry Finn nor its consistent use in the classroom have diminished, highlighting the novel’s wide-ranging influence and its continued importance in American society. An incomparable adventure story, it is a vignette of a turbulent, yet hopeful epoch in American history, defining the experience of a nation in voices often satirical, but always authentic.

Praise For Adventures of Huckleberry Finn…

Mark Twain (1835–1910) was born Samuel Langhorne Clemens in Florida, Missouri. Starting out as typesetter, he went on to work as a steamboat pilot, prospector, and journalist before publishing his first major book, The Innocents Abroad.

Azar Nafisi is the #1 New York Times bestselling author of Reading Lolita in Tehran, Things I’ve Been Silent About, and The Republic of Imagination. A passionate advocate of books and reading, she appears regularly on major media and speaks to packed audiences around the world. She lives in Washington, D.C.

R. Kent Rasmussen is the author or editor of nine books on Mark Twain, including the award-winning Mark Twain A to Z, as well as more than a dozen other books. He lives in Southern California.
Loading...
or support indie stores by buying on