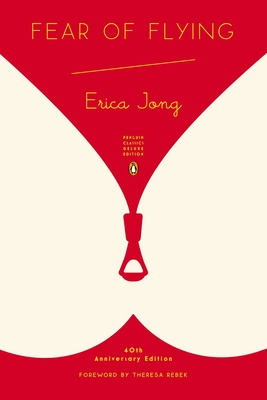 Before Hannah from Girls, Anastasia Steele from Fifty Shades of Grey, and Carrie Bradshaw from Sex and the City, there was Isadora Wing, the uninhibited, outspoken protagonist of Erica Jong’s revolutionary novel. First published in 1973, Fear of Flying caused a national sensation, fueling fantasies, igniting debates about women and sex, and introducing a notorious phrase to the English language. Forty years later, Isadora’s honest and exuberant retelling of her sexual adventures—and misadventures—continues to provoke and inspire, and stands as an iconic tale of self-discovery, liberation, and womanhood. With provocative cover art by illustrator Noma Bar, this special fortieth-anniversary edition will introduce a new generation of women to Jong’s pioneering novel.

"This book will make literary history...because of it women are going to find their own voice and give us great sagas of sex, life, joy, and adventure."
–Henry Miller

"There is something about Fear of Flying that remain perpetually relevant. That's the question of what a young woman should do with herself: how she should reconcile her own ambitions with the dictates of society."
–Rebecca Mead, Allure

"Transcends being a woman's book and becomes a latter-day Ulysses, with a female Bloom stumbling and groping, but surviving."
–Wall Street Journal

“A picaresque, funny, touching adventure of Isadora Wing…on the run from her psychoanalyst husband, in quest of joy and her own true self.”
–The New York Review of Books

“The book that started it all by the woman who started it all. The one absolutely necessary read for any women of any generation who wants to see herself as intellectually and sexually alive—or any man who wants to understand the smart, sexually lively woman. As fresh as the day it was written and unmissable.”
–Naomi Wolf

"A great book, with a warm and funny heroine…It's simply fun to read the adventures of the deeply likable Isadora Wing, and it's sexy as hell."
—NPR Guide to 2013’s Great Reads

Erica Jong is the author of more than twenty works of fiction, nonfiction, and poetry, including What Do Women Want; Seducing the Demon: Writing for My Life; and Sappho’s Leap. She lives in New York City.

Noma Bar was born in Israel and graduated from the Bezalel Academy of Art and Design. Based in London, he has illustrated more than sixty magazine covers and is the author of The Many Faces of Noma Bar and Negative Space.
Loading...
or support indie stores by buying on