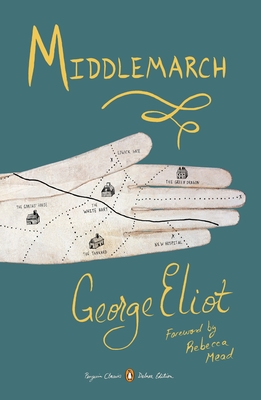 George Eliot’s beloved masterpiece in a Penguin Classics Deluxe Edition with a foreword by Rebecca Mead, author of the bestselling memoir My Life in Middlemarch

A triumph of realist fiction, George Eliot’s Middlemarch: A Study of Provincial Life explores a fictional nineteenth-century Midlands town in the midst of sweeping change. The proposed Reform Bill, the new railroads, and scientific advances are threatening upheaval on every front. Against this backdrop, the quiet drama of ordinary lives is played out by the novel’s complexly portrayed characters—until the arrival of two outsiders further disrupts the town’s equilibrium. Every bit as powerful and perceptive in our time as it was in the Victorian era, Middlemarch displays George Eliot’s clear-eyed yet humane understanding of characters caught up in the mysterious unfolding of self-knowledge.

In this elegant Penguin Classics Deluxe Edition, Rebecca Mead introduces the novel that shaped her life and reflects on its joys and its timeless relevance.

“Middlemarch, the magnificent book which with all its imperfections is one of the few English novels written for grown-up people.”
—Virginia Woolf

“The most profound, wise and absorbing of English novels . . . and, above all, truthful and forgiving about human behaviour.”
—Hermione Lee

"No Victorian novel approaches Middlemarch in its width of reference, its intellectual power, or the imperturbable spaciousness of its narrative...I doubt if any Victorian novelist has as much to teach the modern novelists as George Eliot...No writer has ever represented the ambiguities of moral choice so fully".
—V. S. Pritchett

"It is possible to argue that Middlemarch is the greatest English novel."
—A. S. Byatt

George Eliot (1819–1880), whose real name was Mary Ann Evans Cross, left school at the age of sixteen and embarked on a program of independent study to further her intellectual growth before becoming one of the leading novelists of the Victorian era. Her seven novels also include The Mill on the Floss, Adam Bede, and Silas Marner.

Rebecca Mead is a staff writer at the New Yorker and the author of My Life in Middlemarch. She lives in New York.
Loading...
or support indie stores by buying on