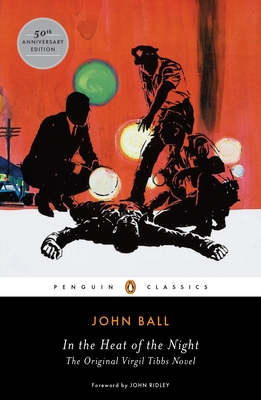 In the Heat of the Night (Paperback)

A 50th-anniversary edition of the pioneering novel featuring African American police detective Virgil Tibbs—with a foreword by John Ridley, creator of the TV series American Crime and Oscar-winning screenwriter of 12 Years a Slave

“They call me Mr. Tibbs” was the line immortalized by Sidney Poitier in the 1967 Oscar-winning movie adaptation of In the Heat of the Night, which won the Edgar Award for Best First Novel and the Crime Writers’ Association Gold Dagger Award and was named one of the 100 Favorite Mysteries of the 20th Century by the Independent Mystery Booksellers Association. Now fans of classic crime can rediscover this suspense-filled novel whose hero paved the way for James Patterson’s Alex Cross, George Pelecanos’s Derek Strange, and other African American detectives.

A small southern town in the 1960s. A musician found dead on the highway. It’s no surprise when white detectives arrest a black man for the murder. What is a surprise is that the black man—Virgil Tibbs—is not the killer but a skilled homicide detective, passing through racially tense Wells, South Carolina, on his way back to California. Even more surprising, Wells’s new police chief recruits Tibbs to help with the investigation. But Tibbs’s presence in town rubs some of the locals the wrong way, and it won’t be long before the martial arts–trained detective has to fight not just for justice, but also for his own safety.

John Ball (1911–1988) wrote more than thirty novels across numerous genres; his Virgil Tibbs series remains his best-known work. Born in Schenectady, New York, he grew up in Milwaukee, Wisconsin, and worked briefly as a part-time police officer in Los Angeles.

John Ridley (foreword) is an award-winning screenwriter, film director, and novelist. The creator of the acclaimed television series American Crime, he won the Academy Award for Best Adapted Screenplay for 12 Years a Slave.

Praise For In the Heat of the Night: The Original Virgil Tibbs Novel…

“A landmark among expressions of racial justice that retains its power today . . . A resonant take on southern justice . . . that has had more lasting impact than works many times its size.” —John Ridley, from the Foreword

“[Virgil Tibbs is] a remarkable individual who may well end up in the great detective category.” —The New York Times
or
Buy Here
Copyright © 2020 American Booksellers Association