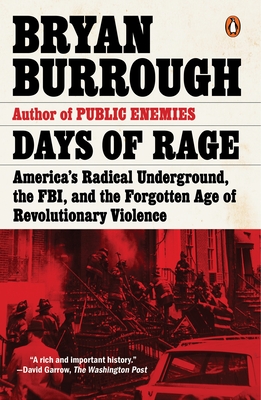 America's Radical Underground, the FBI, and the Forgotten Age of Revolutionary Violence

From the bestselling author of Public Enemies and The Big Rich, an explosive account of the decade-long battle between the FBI and the homegrown revolutionary movements of the 1970s

The Weathermen. The Symbionese Liberation Army. The FALN. The Black Liberation Army. The names seem quaint now, when not forgotten altogether. But there was a time in America, during the 1970s, when bombings by domestic underground groups were a daily occurrence. The FBI combated these and other groups as nodes in a single revolutionary underground, dedicated to the violent overthrow of the American government.

In Days of Rage, Bryan Burrough re-creates an atmosphere that seems almost unbelievable just forty years later, conjuring a time of native-born radicals, most of them “nice middle-class kids,” smuggling bombs into skyscrapers and detonating them inside the Pentagon and the U.S. Capitol, at a Boston courthouse and a Wall Street restaurant packed with lunchtime diners. The FBI’s fevered response included the formation of a secret task force called Squad 47, dedicated to hunting the groups down and rolling them up. But Squad 47 itself broke many laws in its attempts to bring the revolutionaries to justice, and its efforts ultimately ended in fiasco.

Drawing on revelatory interviews with members of the underground and the FBI who speak about their experiences for the first time, Days of Rage is a mesmerizing book that takes us into the hearts and minds of homegrown terrorists and federal agents alike and weaves their stories into a spellbinding secret history of the 1970s.


Praise For Days of Rage: America's Radical Underground, the FBI, and the Forgotten Age of Revolutionary Violence…

Washington Post:
“[A] rich and important history. . . deep and sweeping. . . .  wide-ranging and often revelatory interviews with many Weather alumni.”

Seattle Times:
“In “Days of Rage,” Bryan Burrough, author of “Public Enemies,” provides a fascinating look at an almost forgotten era of homegrown terrorism  . . . . The book is utterly captivating, coupling careful historical research with breathless accounts of the bombings and the perpetrators’ narrow escapes.”

Vanity Fair:
“Days of Rage is bound to alter the conversation about this crucial topic of our time.”

History News Network:
“This is a vivid, engrossing, and far-ranging work that provides a detailed glimpse of a half-dozen underground radical groups in the Vietnam era and its aftermath ...represents a heroic work of reportage...His work on the lesser-known revolutionary groups of the period, such as the Black Liberation Army, is in fact unprecedented; they never have received such detailed and exhaustive treatment. And to the extent that he goes over familiar territory, Burrough does a nice job of demythologizing his subjects. To his credit, the reader gets warts-and-all portraits and not hagiography.”

Booklist:
“A fascinating, in-depth look at a tumultuous period of American unrest.”

Kirkus Reviews:
"A stirring history of that bad time, 45-odd years ago, when we didn't need a weatherman to know which way the wind was blowing, though we knew it was loud . . . [DAYS OF RAGE] is thoroughgoing and fascinating . . . A superb chronicle. . . that sheds light on how the war on terror is being waged today."

William D. Cohan, author of House of Cards, Money and Power, and The Price of Silence:
“In spellbinding fashion, Bryan Burrough’s Days of Rage brilliantly explicates one of the most confounding periods of recent American history—the era when a web of home-grown radicals and self-styled anarchists busily plotted the overthrow of the American government. Rarely has such a subject been matched with a writer and reporter of Burrough’s extraordinary skill. I could not put the book down; you won't be able to, either.”

Beverly Gage, Yale University; author of The Day Wall Street Exploded:
“A fascinating portrait of the all-but-forgotten radical underground of the 1960s, ’70s, and ’80s. Burroughs gives us the first full picture of a secret world where radical dreams often ended in personal and political tragedy.”

Mark Harris, author of Pictures at a Revolution and Five Came Back:
“Bryan Burrough gives the story of America’s armed underground revolutionaries of the 1960s and 1970s what it has long desperately needed: Clarity, levelheadedness, context, and reportorial rigor. He has sifted the embers of an essential conflagration of the counterculture, found within it a suspenseful and enlightening history, and told it in a way that is blessedly free of cant or point-scoring.”

Paul Ingrassia, Pulitzer Prize-winning author of Engines of Change and Crash Course:
“Bryan Burrough has delivered a terrific piece of research, reportage and storytelling. Those who lived through the period of America's radical underground, as I did, will be amazed to learn how much they didn’t.”

Bryan Burrough is a special correspondent at Vanity Fair and the author of five previous books, including The Big Rich and Public Enemies. A former reporter for the Wall Street Journal, he is a three-time winner of the Gerald Loeb Award for excellence in financial journalism.
Loading...
or support indie stores by buying on
(This book is on backorder)