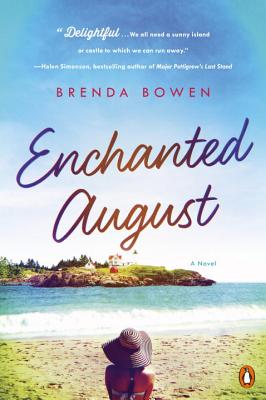 “Four unlikely companions join together to rent Hopewell Cottage on Little Lost Island, Maine, for one glorious summer month during which they gradually open up to one another and rediscover their capacity to give and receive love. A brilliant homage to a beloved classic, Bowen's debut novel is a sparkling read any month of the year.”
— Rona Brinlee, The BookMark, Neptune Beach, FL
View the List

“A charming, thoroughly engrossing novel that’s the next best thing to being there.” —People Magazine

So reads an ad on Lottie Wilkes’ and Rose Arbuthnot’s children’s preschool bulletin board.

When the mothers arrive on the island, they are transformed by the salt air; the breathtaking views; the long, lazy days; and the happy routine of lobster, corn, and cocktails on the wraparound porch. By the time of the late-August blue moon, real life and its complications have finally fallen far, far away. For on this idyllic island they gradually begin to open up: to one another and to the possibilities of lives quite different from the ones they’ve been leading. Change can’t be that hard, can it?

With a cast of endearingly imperfect characters—including indie movie star Caroline Dester and an elderly Beverly Fisher, who is recovering from heartbreaking loss—and set against the beauty of a gorgeous New England summer, Enchanted August is a sparkling summer debut that brilliantly updates the beloved classic The Enchanted April in a novel of love and reawakening that is simply irresistible.

Praise For Enchanted August: A Novel…

“A delightful retelling of the enchanting classic.  I'm dreaming of blueberries and Maine lobster. We all need a sunny island or castle to which we can run away.”
—Helen Simonson, bestselling author of Major Pettigrew’s Last Stand

“Enchanted August  is a true charmer of a novel, written with humor, sensitivity, and a huge amount of heart. I fell in love with the glorious Maine setting and with the quirky and endearing characters who find themselves thrown together there. It’s a perfect summer read—for any time of the year.”
—Will Schwalbe, author of the New York Times bestseller The End of Your Life Book Club

“Enchanted August is as lovely and salty as an afternoon on an island in Maine.  Brenda Bowen writes with humor and with love about the spell cast on the unsuspecting by a cottage by the sea.  And her endearing characters wind up, at summer’s end, with something even more precious than lobster: a second chance.”
—Jennifer Finney Boylan, author of She’s Not There

“Brenda Bowen has written a book filled with turns and reveals as twisty as the flower-bordered island island paths. Recommended for those who treasure books filled with heart, humor, friendship, love, and forgiveness, and for those who love Maine.”
— Morgan Callan Rogers, author of Red Ruby Heart in a Cold Blue Sea

"A bewitching story with characters as rich and delightful as summertime in Maine, ENCHANTED AUGUST indulges its readers with stories of friendship, love and new beginnings."
—Mary Kubica, author of The Good Girl

“Enchanted August is a frothy delight—witty, poignant, and surprising…a magical summer sojourn.”
—Lauren Belfer, author of A Fierce Radiance and City of Light

“A charming, thoroughly engrossing novel that’s the next best thing to being there.” —People Magazine

“Bowen has conjured up a delightful and inviting island summer complete with all the sights, sounds, smells, and tastes of Maine to create a feast for the senses…this feel-good story will make an enjoyable summer read for romance lovers.”
--Booklist

“A paean to coastal Maine and island living, and a treatise on loving the one you're with. . . a smartly crafted beach read….an old-fashioned love story with humor and heart” —Publishers Weekly

“With touches of Shakespearian comedy, this is. . .  bright and kind and optimistic. A thoroughly pleasant summer read as breezy as the island itself.”
—Kirkus Reviews

“Bowen has created a charming and witty update with a setting that could not be more appealing—from the woodland fairy houses and twin turrets in the island cottage to the rocky beaches and all-day lobster bakes. Enchanted August reminds us that sometimes it just takes a change of scenery to reveal that love is right in front of us.” —BookPage

“A heartwarming read, allowing the reader absorb the briny air, the taste of boiled lobsters, and cozy gatherings that bring one back to the languorous days of long ago endless summers.” —New York Journal of Books

Brenda Bowen is a literary agent. She lives in New York, and spends as much of her summer as she can on an island much like Little Lost Island in Maine. Enchanted August is her adult debut.