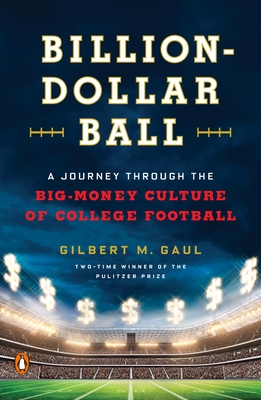 A Journey Through the Big-Money Culture of College Football

“A penetrating examination of how the elite college football programs have become ‘giant entertainment businesses that happened to do a little education on the side.’”—Mark Kram, The New York Times

Two-time Pulitzer-Prize-winning journalist Gilbert M. Gaul offers a riveting and sometimes shocking look inside the money culture of college football and how it has come to dominate a surprising number of colleges and universities.

Over the past decade college football has not only doubled in size, but its elite programs have become a $2.5-billion-a-year entertainment business, with lavishly paid coaches, lucrative television deals, and corporate sponsors eager to slap their logos on everything from scoreboards to footballs and uniforms. Profit margins among the top football schools range from 60% to 75%—results that dwarf those of such high-profile companies as Apple, Facebook, and Microsoft—yet thanks to the support of their football-mad representatives in Congress, teams aren’t required to pay taxes. In most cases, those windfalls are not passed on to the universities themselves, but flow directly back into their athletic departments.

College presidents have been unwilling or powerless to stop a system that has spawned a wildly profligate infrastructure of coaches, trainers, marketing gurus, and a growing cadre of bureaucrats whose sole purpose is to ensure that players remain academically eligible to play. From the University of Oregon’s lavish $42 million academic center for athletes to Alabama coach Nick Saban’s $7 million paycheck—ten times what the school pays its president, and 70 times what a full-time professor there earns—Gaul examines in depth the extraordinary financial model that supports college football and the effect it has had not only on other athletic programs but on academic ones as well.

What are the consequences when college football coaches are the highest paid public employees in over half the states in an economically troubled country, or when football players at some schools receive ten times the amount of scholarship awards that academically gifted students do? Billion-Dollar Ball considers these and many other issues in a compelling account of how an astonishingly wealthy sports franchise has begun to reframe campus values and distort the fundamental academic mission of our universities.

Praise For Billion-Dollar Ball: A Journey Through the Big-Money Culture of College Football…

“College football is no longer just a game. Gilbert M. Gaul contends precisely that in his persuasive new book . . . . A penetrating examination of how the elite college football programs have become ‘giant entertainment businesses that happened to do a little education on the side.’”
—Mark Kram Jr., The New York Times

“Billion-Dollar Ball compels us to see . . . a money­making spectacle that ‘has challenged the notion of universities as places of learning and reflection.’ . . .  [Gaul] casts a sober eye on the economic landscape of college football—the tax breaks, television deals and corporate sponsorships that create staggering revenues for powerhouse programs. . . . Gaul comes across like a bemused accountant trying to make sense of these absurd numbers. But occasionally, he’s more of a modern-day Twain, visiting college campuses and asking all sorts of people all sorts of questions.”
—Ihsan Taylor, New York Times Book Review

“A hard and challenging book, but one that I hope college football diehards will join me in reading. . . . When we cheer for our schools and our teams, we’re also supporting a powerful and autonomous entertainment business that monetizes every aspect of the game, an operation that is not only divorced from the mission of higher education but that often undermines it. . . . The book skillfully chronicles and quantifies the more mercenary aspects of the game that many fans have long avoided.”
—Carlos Lozada, The Washington Post

“Outside the United States, university is where you study. But for thousands of supersized American males, it is where you go to run into other men of similar proportions like particles in the Large Hadron Collider. . . . In recent years critics have accused American universities, which together earn $10 billion a year in athletic revenue, of exploiting an unpaid labour force. Moreover, numerous players have filed lawsuits demanding a piece of the pie. In Billion-Dollar Ball Gilbert Gaul, a journalist, eschews these criticisms in favour of a more fundamental angle of attack: that running such large entertainment businesses is incompatible with the core task of universities. . . . Mr. Gaul’s decision to shift the focus from the ‘narrative du jour’ of harm to players to the huge resources universities pour into football could conceivably provide a valuable contrarian perspective.”
—The Economist

“Innocents might wonder why a book on US college football—an amateur sport, they might think—belongs in a business books section. Americans, however, know it is a very big business, with a model, as Gilbert M Gaul explains in his meticulously researched and wickedly well-written volume, which any corporate mogul should learn and digest. . . . College football also reflects contemporary US society; not only do the rich get richer and the poor struggle to survive but the big football programmes are run totally independently of the universities they represent. College presidents joke about this but they have decided that a successful football team enhances the school’s brand. It is not unlike banks being too big to fail.”
—Jurek Martin, Financial Times

“Just as the college football season opens, investigative reporter Gilbert M. Gaul blows the whistle with Billion-Dollar Ball. . . .Thanks to television contracts, he says, football-power campuses are awash with cash, to the detriment of lesser schools, where student fees pay for sports. . . . Gaul notes that college athletics were originally designed to enhance the college experience for students, not to swell the coffers of big-power campuses. But as he tours big-power campuses like Texas, Alabama and Oregon, he muses that the lure of big-money has blindsided idealism.”
—Harry Levins, St. Louis Post-Dispatch

“Almost nobody is spared in Gilbert M. Gaul’s latest book, Billion-Dollar Ball. . . . [Gaul examines] how the revenue the successful teams bring in keeps growing—and how those dollars are spent: on ever-increasing coaches’ salaries, improved facilities (needed or not) and keeping athletes eligible in various ways from tutors to walkers (people paid to make sure the players go to class).”
—Roman Augustoviz, Minneapolis Star Tribune

“[Billion-Dollar Ball] details how elite gridiron programs have come to dominate the institutions they represent, distorting higher education's supposed balance between athletics and academics. . . . Noting that elite football schools tend to tout their gridiron success more than their academic offerings, Gaul says college presidents have embraced big-time football as a branding mechanism and a lure for alumni and prospective students. For most schools, though, football's a losing financial proposition, absorbing millions of dollars ‘that might otherwise be used for building a new lab or lowering tuition.’ . . . And Gaul puts the eye-popping financial figures he cites in thought-provoking perspective when he writes, ‘It is impossible to exaggerate how football dependent many of the largest, best-known universities have become.’”
—Alan Wallace, Pittsburgh Tribune-Review

“The two-time Pulitzer Prize-winning journalist turns his investigative eye on the big-time business of college football, where he says elite schools are monetizing the sport for record profits. Texas schools and the Big 12 are well-represented throughout, and former Notre Dame and Kansas coach Charlie Weis is singled out for being paid more than $23 million by the two schools not to coach.”
—Celeste Williams, Fort Worth Star-Telegram

“Gaul follows the money straight into the end zone, locker room, and alumni skybox. . . Gaul's reporting is unassailable, but watch as his conclusions stir up a furor in the sports press. You don't even have to hate football to find this book valuable—and certainly worth reading.”
—Kirkus Reviews

“With the depth and clarity that have defined his distinguished investigative reporting career, Gilbert Gaul takes readers on an enlightening if sobering tour of modern college football. What does a ‘walker’ do for players at Kansas? Why does Princeton have nearly twice as many varsity athletes as Texas? Billion-Dollar Ball not only has the answers, it raises the right questions.”
—David Maraniss, author of When Pride Still Mattered: A Life of Vince Lombardi

“Billion-Dollar Ball is really a book about piracy. Two time Pulitzer prize winner Gil Gaul exposes the schemes by which a small group of honchos have hijacked universities and diverted the profits of college sports which equal those of large corporations, into their own pockets without answering to anyone. It's a ground-breaking work of reporting that cries out for a federal investigation.”
—Sally Jenkins, Washington Post columnist and author of The Real All Americans and The State of Jones

“With an uncanny combination of tenacious investigative reporting and effervescent prose, Gilbert Gaul has written an urgently important and immensely readable book. Even for a college football fan like me, Billion-Dollar Ball raises painfully disquieting questions.”
—Samuel G. Freedman, author of Breaking the Line and Letters to a Young Journalist

“This book is timely and important. Gil Gaul paints a devastating picture of the transformation of what once at least resembled a college sport into ‘an elaborately rich entertainment.’ The forces that have driven this evolution cannot be reversed by reforms from within. It is going to take some combination of the courts and federal legislators to force real change—and probably the dismemberment of the NCAA as we know it today. Things probably have to get worse before they can get better.”
—William G. Bowen, President emeritus of Princeton University and The Andrew W. Mellon Foundation

Gilbert M. Gaul twice won the Pulitzer Prize and has been shortlisted for the Pulitzer four other times. For more than thirty-five years, he worked as an investigative journalist for The Washington Post, Philadelphia Inquirer and other newspapers. He has reported on non-profit organizations, the business of college sports, homeland security, the black market for prescription drugs and problems in the Medicare program. He was a Nieman Fellow at Harvard University and a Ferris Fellow at Princeton University. The author of three previous books of investigative reporting, Gaul lives in New Jersey.
Loading...
or
Not Currently Available for Direct Purchase