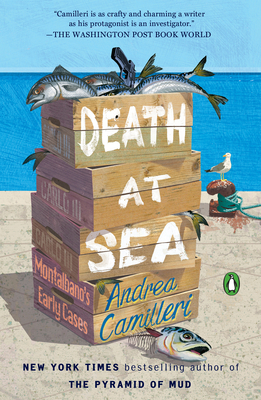 “You either love Andrea Camilleri or you haven’t read him yet. Each novel in this wholly addictive, entirely magical series, set in Sicily and starring a detective unlike any other in crime fiction, blasts the brain like a shot of pure oxygen... transporting. Long live Camilleri, and long live Montalbano.”
—A.J. Finn, #1 New York Times bestselling author of The Woman in the Window

Set on the Sicilian coast, a collection of eight short stories featuring the young Inspector Montalbano

In 1980s Vigàta, a restless Inspector Montalbano brings his bold investigative style to eight enthralling cases. From jilted lovers and deadly family affairs to assassination attempts and murders in unexpected places, Death at Sea is the perfect collection to escape into Andrea Camilleri's unforgettable slice of Sicily.

Andrea Camilleri, a mega-bestseller in Italy and Germany, is the author of the New York Times bestselling Inspector Montalbano mystery series as well as historical novels that take place in nineteenth-century Sicily. His books have been made into Italian TV shows and translated into thirty-two languages. His thirteenth Montalbano novel, The Potter's Field, won the Crime Writers' Association International Dagger Award and was longlisted for the IMPAC Dublin Literary Award.

Praise for Andrea Camilleri and the Inspector Montalbano Series

“The novels of Andrea Camilleri breathe out the sense of place, the sense of humor, and the sense of despair that fills the air of Sicily."—Donna Leon
or support indie stores by buying on
Copyright © 2020 American Booksellers Association