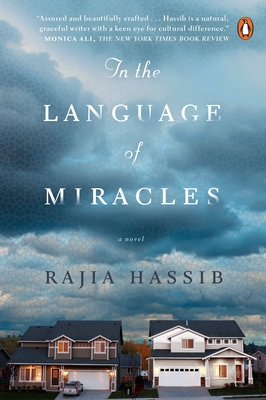 In the Language of Miracles

“Assured and beautifully crafted . . . Hassib is a natural, graceful writer with a keen eye for cultural difference. . . . [She] handles the anatomy of grief with great delicacy. . . . In the Language of Miracles should find a large and eager readership. For the beauty of the writing alone, Hassib deserves it.” —Monica Ali, The New York Times Book Review

For readers of House of Sand and Fog, a mesmerizing debut novel of an Egyptian American family and the wrenching tragedy that tears their lives apart, from the author of A Pure Heart

Samir and Nagla Al-Menshawy appear to have attained the American dream. After immigrating to the United States from Egypt, Samir successfully works his way through a residency and launches his own medical practice as Nagla tends to their firstborn, Hosaam, in the cramped quarters of a small apartment. Soon the growing family moves into a big house in the manicured New Jersey suburb of Summerset, where their three children eventually attend school with Natalie Bradstreet, the daughter of their neighbors and best friends. More than a decade later, the family’s seemingly stable life is suddenly upended when a devastating turn of events leaves Hosaam and Natalie dead and turns the Al-Menshawys into outcasts in their own town.

Narrated a year after Hosaam and Natalie’s deaths, Rajia Hassib’s heartfelt novel follows the Al-Menshawys during the five days leading up to the memorial service that the Bradstreets have organized to mark the one-year anniversary of their daughter’s death. While Nagla strives to understand her role in the tragedy and Samir desperately seeks reconciliation with the community, Khaled, their surviving son, finds himself living in the shadow of his troubled brother. Struggling under the guilt and pressure of being the good son, Khaled turns to the city in hopes of finding happiness away from the painful memories home conjures. Yet he is repeatedly pulled back home to his grandmother, Ehsan, who arrives from Egypt armed with incense, prayers, and an unyielding determination to stop the unraveling of her daughter’s family. In Ehsan, Khaled finds either a true hope of salvation or the embodiment of everything he must flee if he is ever to find himself.

Writing with unflinchingly honest prose, Rajia Hassib tells the story of one family pushed to the brink by tragedy and mental illness, trying to salvage the life they worked so hard to achieve. The graceful, elegiac voice of In the Language of Miracles paints tender portraits of a family’s struggle to move on in the wake of heartbreak, to stay true to its traditions, and above all else, to find acceptance and reconciliation.

Praise For In the Language of Miracles: A Novel…

“Assured and beautifully crafted. . . . Hassib is a natural, graceful writer with a keen eye for cultural difference. . . . [She] handles the anatomy of grief with great delicacy. . . . In the Language of Miracles should find a large and eager readership. For the beauty of the writing alone, Hassib deserves it.”
—Monica Ali, The New York Times Book Review

“This powerful and moving story wrestles with family, tradition, mental illness, grief, love, shame and the realities of being a Muslim in America post 9/11. . . . Hassib’s characters live and breathe with an honesty and vulnerability that makes them unforgettable.”
—The Herald-Dispatch

“A riveting and important book. It drives home the fact that no matter what religion we practice or country we are from, we are more alike than we think. [In the Language of Miracles] narrows the gap between us and may make us a bit more tolerant, understanding, and accepting.”
—The Missourian

“Impressive. . . . From [Hassib’s] first page to her denouement we can be gripped and moved by a study of the fault-lines within an immigrant family.”
—The National

“Hassib writes with an authority uncommon in debut writers; in this important book, she weaves the beauty of Arabic culture with the harsh realities of modern American life with exceptional insight and poetic ease.”
—Bustle.com

“[A] stellar debut. . . . Thoughtfully examining the role of religion and prayer, parents and grandparents, this rich novel offers complex characters, beautiful writing, and astute observations about the similarities and differences between the Egyptian and American outlooks on life. It would be difficult to find a better book for any discussion group; highly recommended.”
—Library Journal (starred review)

“Topical both in its take on race relations and in its depiction of a trouble young man with ready access to firearms. . . . Hassib is a capable writer, especially when dealing with the interpersonal. Her natural use of language resembles that of Khaled Hosseini.”
—BookPage

“A family reckons with tragedy amid a storm of suspicion in Egyptian author Hassib’s debut novel. . . . [In the Language of Miracles] offers fascinating insight into the lives of American Muslims, and the prejudice with which they contended in the years after 9/11.”
—Publishers Weekly

“[An] admirable debut . . . Hassib does fine work portraying a family divided by culturally and generationally divergent reactions to a harrowing situation, and the novel builds to a gratifying crescendo as the memorial nears and tensions rise.”
—Booklist

“Spoken words are all powerful in Rajia Hassib’s masterful book about thought vs. action.  Whether the characters are explaining, questioning, or stating their deepest beliefs, though, conversation never creates anything; it’s the human response to the life that subsumes us, whether we’re active or passive.  In the face of tragedy, and even great happiness, abstractions fall away; the personal and particular endure.  It’s a very moving book.”
—Ann Beattie

“Smart, nuanced and culturally dazzling, In the Language of Miracles is a heartrending story of Egyptians and Americans, of two families whose lives are intertwined and then unraveled by fate. Hassib’s writing has an intoxicating quality that made this a page-turner, but by the end, her beautiful story surpasses its characters in its unflinching investigation of tragedy, mental illness, and healing across two cultures in conflict.”
—Zoë Ferraris, author of Finding Nouf and City of Veils

“Rajia Hassib's In the Language of Miracles is a tautly told story of one family’s grief and the quiet but daunting burden of survivorship. She has deftly captured their individual struggles as they swim through the deep waters of loss and blame. We turn page after page and hope, as all bereaved do, that there’s a chance for healing.”
—Nadia Hashimi, author of When the Moon is Low and The Pearl That Broke Its Shell

“Rajia Hassib’s timely novel is a gripping, hold-your-breath exposé about being Muslim in post-9/11 America where the heinous act of one can demonize all. But it’s also a universal, multi-generational, immigrant tale. The old-world, Egyptian grandmother’s bungled English, her prayers and incense, rub against her American-born, tech-savvy grandchildren’s bungled Arabic and Western music. It’s an intelligent, beautifully rendered reminder that no matter our ethnicity or creed, we all long for acceptance and a place to call home.”
—Marie Manilla, author of The Patron Saint of Ugly

“Rajia Hassib has a finger on the pulse of two languages and two cultures. She deftly spins an honest tale of a family reeling in the wake of tragedy, all the while exploring the subtle complexities embedded in communication, culture, and human relationships.”
—Laila Halaby, author of Once in a Promised Land

Rajia Hassib was born and raised in Egypt and moved to the United States when she was twenty-three. She holds an MA in creative writing from Marshall University and her writing has appeared in The New Yorker online, Upstreet, Steam Ticket, and Border Crossing magazines. She lives in West Virginia.
Loading...
or
Not Currently Available for Direct Purchase