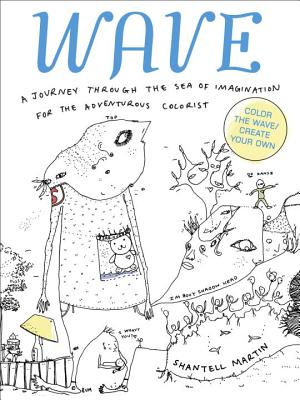 A Journey Through the Sea of Imagination for the Adventurous Colorist

WAVE is not your average coloring book. Once opened, it unfolds into a nine-foot-long panel, featuring a continuous and dream-like illustration by rock star contemporary artist Shantell Martin.

And this unique book also provides a blank canvas: After you add your splash of color, use the reverse side to create your own unfolding illustration, for a final product that’s both inspired and inspiring.

WAVE will bring the art gallery to your living room, a perfect display piece and an opportunity for daring colorists to transform a piece of art in a whole new way.

Praise For WAVE: A Journey Through the Sea of Imagination for the Adventurous Colorist…

“Martin’s masterful line and wild imagination construct an inviting wonderland of whimsical creatures and psychedelic shapes, fusing the soft surrender of a dream with the active alertness of a jubilant hallucination.”—Maria Popova, Brainpickings

“In the midst of an unprecedented wave of adults turning to coloring to ease their anxiety, artist Shantell Martin finds mindfulness in black and white.”—The Huffington Post

SHANTELL MARTIN is a graduate of Central Saint Martins, London, a leading center for art and design education. Her work has graced the cover of the New York Times home section and has appeared in Creative Review magazine, People, Mass Appeal, California Home + Design, and VieMagazine, among other publications. Named French Glamour's "New York's coolest it girl,"  she has collaborated with prominent commercial brands, as well as with bespoke luxury partners like Kelly Wearstler, 3×1 denim, Suno, and Jawbone.

She regularly creates live digital drawings at conferences, musical performances, and museums, including the Brooklyn Museum, the Museum of the Moving Image, and the Museum of Modern Art in New York. Martin has been a visiting scholar at MIT Media Lab and is also an adjunct professor at the Interactive Telecommunications Program (Tisch School of the Arts, NYU).
Loading...
or support indie stores by buying on
(This book is on backorder)