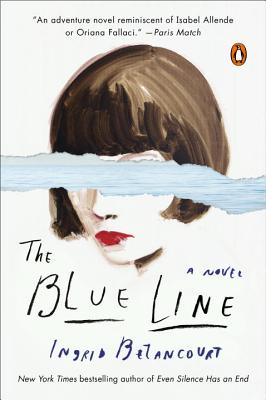 From the extraordinary Colombian French politician and activist Ingrid Betancourt, a stunning debut novel about freedom and fate

Set against the backdrop of Argentina’s Dirty War and infused with magical realism, The Blue Line is a breathtaking story of love and betrayal by one of the world’s most renowned writers and activists. Ingrid Betancourt, author of the New York Times bestselling memoir Even Silence Has an End, draws on history and personal experience in this deeply felt portrait of a woman coming of age as her country falls deeper and deeper into chaos.

Buenos Aires, the 1970s. Julia inherits from her grandmother a gift, precious and burdensome. Sometimes visions appear before her eyes, mysterious and terrible apparitions from the future, seen from the perspective of others. From the age of five, Julia must intervene to prevent horrific events. In fact, as her grandmother tells her, it is her duty to do so—otherwise she will lose her gift.

At fifteen, Julia falls in love with Theo, a handsome revolutionary four years her senior. Their lives are turned upside down when Juan Perón, the former president and military dictator, returns to Argentina. Confronted by the realities of military dictatorship, Julia and Theo become Montoneros sympathizers and radical idealists, equally fascinated by Jesus Christ and Che Guevara. Captured by death squadrons, they somehow manage to escape. . . .

In this remarkable novel, Betancourt, an activist who spent more than six years held hostage by the FARC in the depths of Colombian jungle, returns to many of the themes of Even Silence Has an End. The Blue Line is a story centered on the consequences of oppression, collective subservience, and individual courage, and, most of all, the notion that belief in the future of humanity is an act of faith most beautiful and deserving.


Praise For The Blue Line: A Novel…

Praise for The Blue Line


"Betancourt, the victim of a well-known, six-year-long political kidnapping in ­Colombia, can certainly be taken seriously as a chronicler of South American brutality and repression, and she does not turn away from the ugly truth in her fiction debut…the novel generally propels the reader along with its conviction and moral force."—Library Journal

"Betancourt writes unflinchingly . . . [She] tells an anguished story of passion, sacrifice, imprisonment, torture, and exile with often gruesome detail, historical accuracy, and rising suspense.. . .Betancourt orchestrates an intimate conflict and shocking denouement that fuse the personal and the political in a twenty-first-century variation on Greek tragedy."—Booklist

"A wonderful first novel . . . It’s got what it takes to become this summer’s bestseller."—RTL

"[Ingrid Betancourt] has written her first adventure novel and it’s a great success . . . The writing is vivid and strong."—Le Figaro Magazine

"Striking the perfect balance, The Blue Line is serious and entertaining at once . . . Thoughtfully constructed between the past and present . . . [it] gets to the heart of the matter: how hard it can be to love, but also the horror of not loving and the pain of no longer loving. It is as dense and beautiful as a fall in slow-motion . . ."—Le Point

"An adventure novel reminiscent of Isabel Allende or Oriana Fallaci’s A Man. The torture scenes are Dantean. The novel’s structure allows Ingrid to come back to many of the themes that made Even Silence Has an End so powerful. They reappear in the hearts of new characters, yet are no less believable. "-- Paris Match

"A successful and enthralling first novel."—Europe 1

"In The Blue Line, Betancourt tells a love story – that of Julia and Theo – which also underscores the horror of political persecution and torture during the Argentinian dictatorship. She does so with great narrative strength and a touch of magical realism."—El País

Praise for Ingrid Betancourt's Even Silence Has An End:

"[Even Silence Has An End] is gripping not just for its heart-wrenching portrayal of captivity, but also because of the sharp and useful psychological insights it offers"--The New York Times

Born on December 25, 1961, in Bogotá, Colombia, Ingrid Betancourt was a politician and presidential candidate celebrated for her determination to combat widespread corruption. In 2002 she was taken hostage by the FARC, a brutal terrorist guerrilla organization, and held for more than six and a half years in the Colombian jungle. She was rescued in 2008. She is the author of the New York Times bestselling memoir Even Silence Has an End.