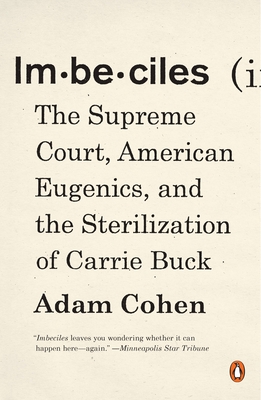 “Imbeciles is at once disturbing, moving, and profoundly important.  With the zeal of an investigative journalist and a novelist’s insight, Adam Cohen tells the story of an injustice carried out at the highest levels of government, and how it reverberated across history and remains with us today.  Cohen is one of our most gifted writers, and he has turned the story of the Supreme Court and American eugenics into one of the best books I’ve read in decades.”—Amy Chua, John M. Duff, Jr. Professor of Law, Yale Law School, and author of The Battle Hymn of the Tiger Mother

ADAM COHEN, a former member of the New York Times editorial board and senior writer for Time magazine, is the authorof Nothing to Fear: FDR’s Inner Circle and the Hundred Days That Created Modern America and the forthcoming Supreme Inequality: The Supreme Court's Fifty Year Battle for a More Unjust America.  A graduate of Harvard Law School, he was president of volume 100 of the Harvard Law Review.
Loading...
or
Not Currently Available for Direct Purchase