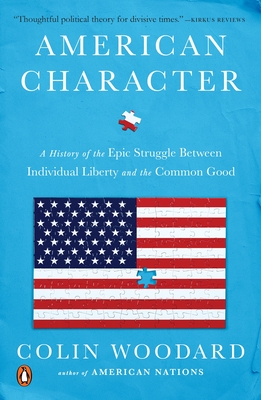 The author of American Nations examines the history of and solutions to the key American question: how best to reconcile individual liberty with the maintenance of a free society

The struggle between individual rights and the good of the community as a whole has been the basis of nearly every major disagreement in our history, from the debates at the Constitutional Convention and in the run up to the Civil War to the fights surrounding the agendas of the Federalists, the Progressives, the New Dealers, the civil rights movement, and the Tea Party. In American Character, Colin Woodard traces these two key strands in American politics through the four centuries of the nation’s existence, from the first colonies through the Gilded Age, Great Depression and the present day, and he explores how different regions of the country have successfully or disastrously accommodated them. The independent streak found its most pernicious form in the antebellum South but was balanced in the Gilded Age by communitarian reform efforts; the New Deal was an example of a successful coalition between communitarian-minded Eastern elites and Southerners.

Woodard argues that maintaining a liberal democracy, a society where mass human freedom is possible, requires finding a balance between protecting individual liberty and nurturing a free society. Going to either libertarian or collectivist extremes results in tyranny. But where does the “sweet spot” lie in the United States, a federation of disparate regional cultures that have always strongly disagreed on these issues? Woodard leads readers on a riveting and revealing journey through four centuries of struggle, experimentation, successes and failures to provide an answer. His historically informed and pragmatic suggestions on how to achieve this balance and break the nation’s political deadlock will be of interest to anyone who cares about the current American predicament—political, ideological, and sociological.


Praise For American Character: A History of the Epic Struggle Between Individual Liberty and the Common Good…

“Woodard, an award-winning journalist for the Portland Press-Herald in Maine, is a terrific writer, and his range is impressive. His musings about the impact of Ayn Rand on American conservatism or a day spent in the terrifying blackness of Nicolae Ceausescu's crumbling Romanian dictatorship are elegant set pieces.”
—David Oshinsky, Washington Post

“An illuminating national portrait at a particularly divisive time.”
—Downeast

“Woodard’s treatise is a must-read for anyone grappling with how we arrived at the present moment . . . Although the prose is effortlessly accessible to a general audience, the manuscript could easily serve as a textbook in a number of different disciplines: history, economics, political science and psychology, just to name a few.”
—Bowling Green (Ky.) Daily News

“A deep analysis of the history of the common good versus individual rights. . . . A healthy democracy needs to balance the two; either one alone leads to disaster. . . . American Character adds a further prism to the public-private spectrum. ‘The struggle for freedom is not bilateral, but instead triangular,’ Woodard writes. ‘The participants are the state, the people, and the would-be aristocracy or oligarchy. Liberal democracy . . . relies on keeping these three forces in balance.’ The history of that struggle is a big-dipper ride through four centuries as first collectivists then individualists take their turn at managing the country. Lurking just below the surface are always mirrors reflecting our own times. . . . Woodard’s essential thesis is vital to understand.”
—Thomas Urquhart, Portland Press-Herald

“Woodard builds on his previous analysis of the country’s regional differences to focus on the conflict between individualism and collectivism that defines our national character. As in his previous book, the author . . . maintains, ‘our country has never been united, either in purpose, principles, or political behavior. We’ve never been a nation-state in the European sense, but rather a federation of nations’ like the European Union. . . . Although we have inherited a legacy of revolution against a king, making us ‘vigilant against the rise of an overarching government that might deny us our individual potential,’ Woodard sees that the vast majority of Americans believe that the ‘American Way’ means ‘pursuing happiness through a free and fair competition between individuals.’ Politicians must reassure voters that fairness is ‘the central issue of our political discourse’ by proposing tax reforms and investments in education that ‘would help keep the playing field even.’ . . . Thoughtful political theory for divisive times.”
—Kirkus Reviews

“[American Nations] sets itself apart by delving deep into history to trace our current divides to ethno-cultural differences that emerged during the country's earliest settlement.”
—The New Republic (Editors’ Picks: Best Books of 2011)

“[A] compelling and informative attempt to make sense of the regional divides in North America in general and this country in particular . . . Woodard provides a bracing corrective to an accepted national narrative that too often overlooks regional variations to tell a simpler and more reassuring story.”
—The Washington Post

“Mr. Woodard’s approach is breezier than [David Hackett] Fischer’s and more historical than [Joel] Garreau’s, but he has earned a place on the shelf between them.”
—The Wall Street Journal

“A smart read that feels particularly timely now, when so many would claim a mythically unified Founding Fathers as their political ancestors.”
—Boston Globe

“[In] offering us a way to better understand the forces at play in the rumpus room of current American politics, Colin Woodard has scored a true triumph.”
—Newsweek/The Daily Beast

“Woodard makes a worthwhile contribution by offering an accessible, well-researched analysis with appeal to both casual and scholarly readers.”
—Library Journal

“[A] fascinating new take on our history. . . ”
—The Christian Science Monitor

Colin Woodard, an award-winning writer and journalist, is currently the state and national affairs writer at the Portland Press Herald and Maine Sunday Telegram and received a 2012 George Polk Award for an investigative project he did for those papers. A longtime foreign correspondent for The Christian Science Monitor, the San Francisco Chronicle, and The Chronicle of Higher Education, he has reported from more than fifty foreign countries and six continents. His work has appeared in dozens of publications, including The Economist, Smithsonian, The Washington Post, Politico, Newsweek, The Daily Beast, The Guardian, Bloomberg View, and Washington Monthly. A graduate of Tufts University and the University of Chicago, he is the author of four previous books including American Nations and The Republic of Pirates.