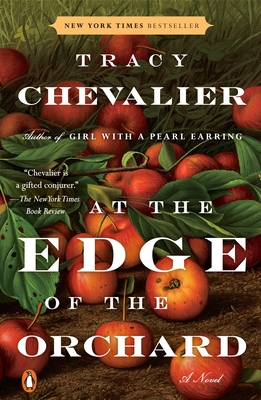 At the Edge of the Orchard (Paperback)

“With impeccable research and flawless prose, Chevalier perfectly conjures the grandeur of the pristine Wild West . . . and the everyday adventurers—male and female—who were bold enough or foolish enough to be drawn to the unknown. She crafts for us an excellent experience.”
—USA Today

From internationally bestselling author Tracy Chevalier, author of A Single Thread, comes a riveting drama of a pioneer family on the American frontier

Praise For At the Edge of the Orchard: A Novel…

“Chevalier is a master at foregrounding the small, dramatic stories of overlooked people from the past.”
—Geraldine Brooks

“Sometimes, a book comes along that somehow ticks all the boxes. This is one of those books: The voices are rich and individual; the attention to detail impressive; the scent of apples, damp earth, and pines runs potently through the whole. A joy.”
—Joanne Harris, author of Chocolat

“With impeccable research and flawless prose, Chevalier perfectly conjures the grandeur of the pristine Wild West Robert encounters, the bawdiness of the period, and the commanding needs of the everyday adventurers ­— male and female — who were bold enough or foolish enough to be drawn to the unknown. She crafts for us an excellent experience.”
—USA Today

“A well written tale about people with courage, including strong women who make the best of what life offers.”
—Washington Times

“Excellently researched…brings to life a seminal chapter in American history…A compelling look at what was lost and gained in westward expansion.”
—People

“Chevalier’s research is painstakingly detailed without weighing down the story…Chevalier has created a patchwork of stories…together they form a picture of lives wrested from an unforgiving land, but with a promise of renewal.”
—The Guardian