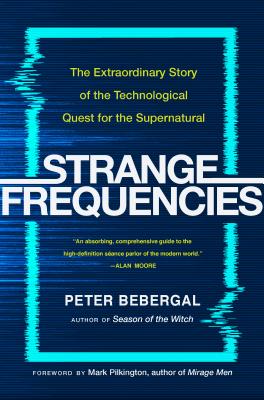 The Extraordinary Story of the Technological Quest for the Supernatural

A journey through the attempts artists, scientists, and tinkerers have made to imagine and communicate with the otherworldly using various technologies, from cameras to radiowaves.

Strange Frequencies takes readers on an extraordinary narrative and historical journey to discover how people have used technology in an effort to search for our own immortality. Bebergal builds his own ghostly gadgets to reach the other side, too, and follows the path of famous inventors, engineers, seekers, and seers who attempted to answer life's ultimate mysteries. He finds that not only are technological innovations potent metaphors keeping our spiritual explorations alive, but literal tools through which to experiment the boundaries of the physical world and our own psyches.

Peter takes the reader alongside as he explores:
•  the legend of the golem and the strange history of automata;
•  a photographer who is trying to capture the physical manifestation of spirits;
•  a homemaker who has recorded voicemails from the dead;
•  a stage magician who combines magic and technology to alter his audience's consciousness;
•  and more.<

Peter Bebergal writes widely on the speculative and slightly fringe. His essays and reviews have appeared in NewYorker.com,The Times Literary Supplement, Boing Boing, The Believer, and The Quietus. He is the author of Season of the Witch: How the Occult Saved Rock and Roll; Too Much to Dream: A Psychedelic American Boyhood and The Faith Between Us: A Jew and a Catholic Search for the Meaning of God (with Scott Korb). Bebergal studied religion and culture at Harvard Divinity School, and lives in Cambridge, Massachusetts.

Praise For Strange Frequencies: The Extraordinary Story of the Technological Quest for the Supernatural…

“With all human culture arguably evolved from Palaeolithic shamanism, Bebergal engagingly explores the uncanny overlap between an ancient landscape of occult ideas and today’s techno-saturated environment, from Victorian table-tilting to the digitally remastered voices of the dead; from confidence tricksters, through the desperate or delusional, to the artists and visionaries currently exploring this marvelous, ectoplasm-damp material. An absorbing, comprehensive guide to the high-definition séance parlor of the modern world, and a timely reminder that, in contemporary civilization, we are never more than a couple of centuries away from an alchemist.”—Alan Moore

“Even the most well-read esoteric scholar will find some new and fascinating bit of lore in Bebergal’s book… an engrossing read… And as far as tour guides to the occult underworld go, you couldn’t ask for a better Virgil than Bebergal: his prose is warm, clever and erudite without being alienating. Read it with as open a mind as he wrote it and you’ll be bound to pick up a few interesting frequencies on your wavelength.”—Fortean Times

“Bebergal dives into the relationship between technical and occult imagination and comes up with something profound about the human experience. By turns funny, spooky, thought-provoking, and moving, Strange Frequencies is brilliant work.”—Daniel Abraham, New York Times bestselling co-author of the Expanse series

“This enchanting, insightful book equates the effects of diverse phenomena from Elizabethan stagecraft, cybernetics and handmade automata and the Brazen Head to astral travel and ectoplasmic manifestations—and examines them all in light of the human hunger for a magic that may be far closer to us than we know.”—Maria Bustillos

“Bebergal deftly explores how we subliminally or overtly use science and technology to rediscover the evolutionary metaphysical heart of what it means to be human, and our desire to speak with voices no longer bound to the Earthly plane.”—J. H. Williams III, Sandman: Overture, Promethea, Echolands, Batwoman

"In these technology-haunted times, we are sorely in need of a guide for the perplexed limning the connections between our eternally seeking souls and our gadget-addled minds. Peter Bebergal is the ideal companion on this quest, finding ghosts hidden in the machines all around us. Strange Frequencies is delightful and engaging examination of the human desire to forge new keys to unlock the mysteries of life.”—Peter Manseau, author of The Apparitionists

“Ever dream of building a monster in your basement? Photographing ghosts? Entering drug-free states of euphoria? You’re not alone. In this brilliant, knowing, and thrill-a-page historical and literary exploration, Peter Bebergal explores the human endeavor to use technology to probe hidden and forbidden zones. Strange Frequencies expands how we understand technology, and takes us into shadowy realms where science and strangeness intermingle.”—Mitch Horowitz, PEN Award-winning author of Occult America and One Simple Idea
or support indie stores by buying on
Copyright © 2020 American Booksellers Association