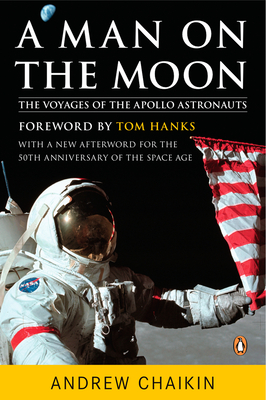 A Man on the Moon (Paperback)

The Voyages of the Apollo Astronauts

"The authoritative masterpiece" (L. A. Times) on the Apollo space program and NASA's journey to the moon

This acclaimed portrait of heroism and ingenuity captures a watershed moment in human history. The astronauts themselves have called it the definitive account of their missions. On the night of July 20, 1969, our world changed forever when Neil Armstrong and Buzz Aldrin walked on the moon. Based on in-depth interviews with twenty-three of the twenty-four moon voyagers, as well as those who struggled to get the program moving, A Man on the Moon conveys every aspect of the Apollo missions with breathtaking immediacy and stunning detail.

A Man on the Moon is also the basis for the acclaimed miniseries produced by Tom Hanks, From the Earth to the Moon, now airing and streaming again on HBO in celebration of the 50th anniversary of Apollo 11.

Andrew Chaikin is the author of the acclaimed A Man on the Moon and several other books about space. He is a commentator for NPR’s Morning Edition and had appeared on Good Morning America, Nightline, Fresh Air, and Talk of the Nation.

Praise For A Man on the Moon: The Voyages of the Apollo Astronauts…

"The power of A Man on the Moon truly astounded me. . . . I found myself transported, reminded of all that was wonderful about Apollo. I laughed and cried."
-Dava Sobel, author of Longitude and Galileo's Daughter

"More inside stories, more details, recollections, and feelings of all the men who traveled to the moon than any other account of the Apollo program."
-The Christian Science Monitor
or support indie stores by buying on
Copyright © 2020 American Booksellers Association