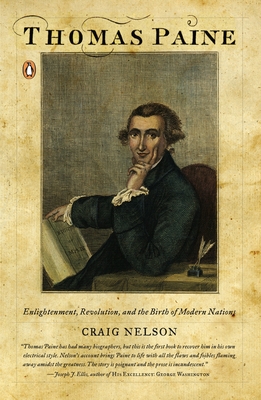 Enlightenment, Revolution, and the Birth of Modern Nations

Despite his being a founder of both the United States and the French Republic, the creator of the phrase "United States of America," and the author of Common Sense, Thomas Paine is the least well known of America's founding fathers. This edifying biography by Craig Nelson traces Paine's path from his years as a London mechanic, through his emergence as the voice of revolutionary fervor on two continents, to his final days in the throes of dementia. By acquainting us as never before with this complex and combative genius, Nelson rescues a giant from obscurity-and gives us a fascinating work of history.

Praise For Thomas Paine: Enlightenment, Revolution, and the Birth of Modern Nations…

"A rewarding new biography . . . as much a primer on the Enlightenment as it is the story of the stay-maker from Thetford-and all the better for it."
-The New Yorker

Craig Nelson is the author of four previous books, including The First Heroes and Let's Get Lost. His writings have appeared in Salon, The New England Review, Blender, Genre, and a host of other publications. He was an editor at HarperCollins, Hyperion, and Random House for almost twenty years and has been profiled by Variety, Interview, Manhattan, Inc., and Time Out.
Loading...
or
Not Currently Available for Direct Purchase