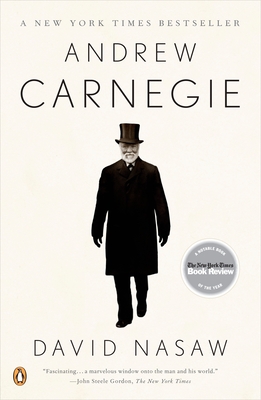 The definitive account of the life of Andrew Carnegie

Celebrated historian David Nasaw, whom The New York Times Book Review has called "a meticulous researcher and a cool analyst," brings new life to the story of one of America's most famous and successful businessmen and philanthropists—in what will prove to be the biography of the season.

Born of modest origins in Scotland in 1835, Andrew Carnegie is best known as the founder of Carnegie Steel. His rags to riches story has never been told as dramatically and vividly as in Nasaw's new biography. Carnegie, the son of an impoverished linen weaver, moved to Pittsburgh at the age of thirteen. The embodiment of the American dream, he pulled himself up from bobbin boy in a cotton factory to become the richest man in the world. He spent the rest of his life giving away the fortune he had accumulated and crusading for international peace. For all that he accomplished and came to represent to the American public—a wildly successful businessman and capitalist, a self-educated writer, peace activist, philanthropist, man of letters, lover of culture, and unabashed enthusiast for American democracy and capitalism—Carnegie has remained, to this day, an enigma.

Nasaw explains how Carnegie made his early fortune and what prompted him to give it all away, how he was drawn into the campaign first against American involvement in the Spanish-American War and then for international peace, and how he used his friendships with presidents and prime ministers to try to pull the world back from the brink of disaster. With a trove of new material—unpublished chapters of Carnegie's Autobiography; personal letters between Carnegie and his future wife, Louise, and other family members; his prenuptial agreement; diaries of family and close friends; his applications for citizenship; his extensive correspondence with Henry Clay Frick; and dozens of private letters to and from presidents Grant, Cleveland, McKinley, Roosevelt, and British prime ministers Gladstone and Balfour, as well as friends Herbert Spencer, Matthew Arnold, and Mark Twain—Nasaw brilliantly plumbs the core of this facinating and complex man, deftly placing his life in cultural and political context as only a master storyteller can.

“The definitive work on Carnegie for the foreseeable future, and it fully deserves to be."—John Steele Gordon, The New York Times

“Never has this story been told so thoroughly or so well as David Nasaw tells it in this massive and monumental biography."—Jonathan Yardley, The Washington Post

“Nasaw’s fine book…seems sure to be the final word on ‘the Star-spangled Scotchman.’”—Los Angeles Times

“Make no mistake: David Nasaw has produced the most thorough, accurate and authoritative biography of Carnegie to date.”—Salon.com

“A comprehensive and often engrossing biography…compelling.”—Booklist

“In this lucid, meticulous, and finely detailed biography, David Nasaw has delivered the authoritative volume on Andrew Carnegie that we have long awaited. He captures in persuasive fashion the many sides of this energetic and kaleidoscopic personality—the abrasive industrialist, the enlightened philanthropist, the aspiring, often infuriatingly self-deluded author and political polemicist—and thereby makes a valuable contribution to the rich literature of America in the Gilded Age.”—Ron Chernow, author of Alexander Hamilton

David Nasaw is the author of Andrew Carnegie and The Chief: The Life of William Randolph Hearst. He is the Arthur M. Schlesinger, Jr., Professor of History at the Graduate Center of the City University of New York.
Loading...
or
Not Currently Available for Direct Purchase