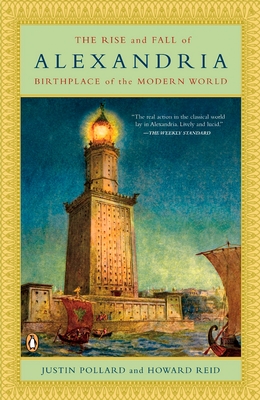 The Rise and Fall of Alexandria

Birthplace of the Modern World

A short history of nearly everything classical. The foundations of the modern world were laid in Alexandria of Egypt at the turn of the first millennium. In this compulsively readable narrative, Justin Pollard and Howard Reid bring one of history's most fascinating and prolific cities to life, creating a treasure trove of our intellectual and cultural origins. Famous for its lighthouse, its library-the greatest in antiquity-and its fertile intellectual and spiritual life--it was here that Christianity and Islam came to prominence as world religions--Alexandria now takes its rightful place alongside Greece and Rome as a titan of the ancient world. Sparkling with fresh insights on science, philosophy, culture, and invention, this is an irresistible, eye- opening delight.

Praise For The Rise and Fall of Alexandria: Birthplace of the Modern World…

"Lively and Lucid. The real action [in] the classical world lay in Alexandria. Tells the story of ancient Alexandrian science, Cleopatra, with relish and brio."
-The Weekly Standard

"A marvelous work, a sweeping narrative, as grand as it is unusual, Pollard and Reid breathe life into the dust of philosophers and kings."
-Barry Strauss, author of The Trojan War: A New History and The Battle of Salamis

Justin Pollard, a freelance writer and producer specializing in historical documentaries, has written for PBS and A&E. He is currently providing script and historical consultancy for Sam Mendes’s upcoming feature film, Tom Fool.

Howard Reid has made award-winning documentaries for National Geographic, the BBC, and Channel 4, including The Story of English. He is the author of five books.