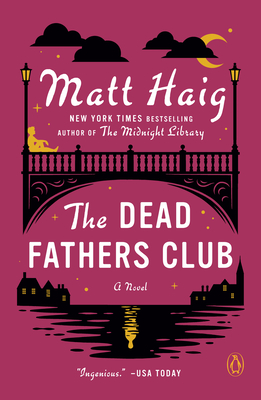 A ghost story with a twist, from Matt Haig, the #1 New York Times bestselling author of The Midnight Library.

"Matt Haig has an empathy for the human condition, the light and the dark of it, and he uses the full palette to build his excellent stories." —Neil Gaiman, author of American Gods

Philip Noble is an eleven-year-old in crisis. His pub landlord father has died in a road accident, and his mother is succumbing to the greasy charms of her dead husband's brother, Uncle Alan. The remaining certainties of Philip's life crumble away when his father's ghost appears in the pub and declares Uncle Alan murdered him.

Arming himself with weapons from the school chemistry cupboard, Philip vows to carry out the ghost's relentless demands for revenge. But can the words of a ghost be trusted any more than the lies of the living?

Praise For The Dead Fathers Club: A Novel…

"The Dead Fathers Club has much to recommend it. . . . It's ingenious."
-USA Today

"We now owe another debt to Shakespeare, and one to Haig, for re-imagining a tragic masterpiece with such wit, force, and-yes-originality."
-Kirkus Reviews (starred review)

"A story . . . so surprising and strange that it vaults into a realm of its own" ― Guardian

“I can't describe how much his work means to me . . . The king of empathy.” ―JAMEELA JAMIL

“Haig is one of the most important writers of our time.” ―DOLLY ALDERTON

“Matt Haig is a writer for children and adults who is adept at digging into the human heart.” ―Sunday Times (London)

“Matt Haig has an empathy for the human condition, the light and the dark of it, and he uses the full palette to build his excellent stories.” ―NEIL GAIMAN

“Matt Haig uses words like a tin-opener. We are the tin.” ―JEANETTE WINTERSON

“Haig is one of the most inspirational popular writers on mental health of our age.” ― Independent (London)

“Haig writes exquisitely from the perspective of the heart-sore outsider, but at their most moving his novels reveal the unbearable beauty of ordinary life.” ―Guardian

“Matt Haig has a way of looking at life which will make you stop and think, and by the time you reach the last page, you will understand the world just that little bit better and feel a little more comfortable being in it.” ―JOANNA CANNON

Matt Haig is the author of the New York Times bestsellers The Midnight Library and The Comfort Book, the internationally bestselling memoirs Reasons to Stay Alive and Notes on a Nervous Planet, and five other novels, including The Dead Fathers Club and The Possession of Mr. Cave, and several award-winning children's books. His work has been translated into more than forty languages.