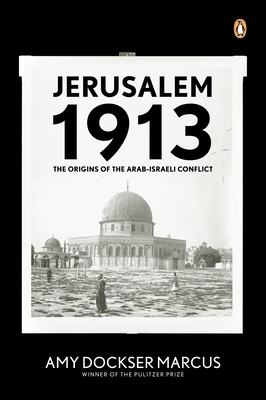 Though the origins of the Arab-Israeli conflict have traditionally been traced to the British Mandate (1920-1948) that ended with the creation of the Israeli state, a new generation of scholars has taken the investigation further back, to the Ottoman period. The first popular account of this key era, Jerusalem 1913 shows us a cosmopolitan city whose religious tolerance crumbled before the onset of Z ionism and its corresponding nationalism on both sides-a conflict that could have been resolved were it not for the onset of World War I. With extraordinary skill, Amy Dockser Marcus rewrites the story of one of the world's most indelible divides.

Amy Dockser Marcus is a staff reporter of The Wall Street Journal. She won a Pulitzer Prize for Beat Reporting in 2005 for her work on state-of-the-art cancer treatments and the patients and their journey through these treatment options. Dockser Marcus is the author of The View from Nebo: How Archaeology Is Rewriting the Bible and Reshaping the Middle East and Jerusalem 1913: The Origins of the Arab-Israeli Conflict, both of which grew out of her reporting as a Middle East correspondent for The Wall Street Journal.

"A richly insightful, highly readable, and acutely felt offering, one that is also critical and even handed . . . a page-turning, heartbreaking narrative."
-San Francisco Chronicle

"Marcus masterfully brings a Jerusalem of almost a century ago to pungent life, and her political dissection of the era is lucid."
-Publishers Weekly
or support indie stores by buying on
Copyright © 2020 American Booksellers Association