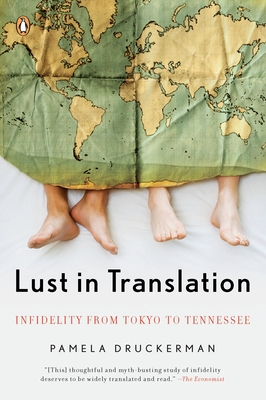 Infidelity from Tokyo to Tennessee

Compared to the citizens of just about every other nation, Americans are the least adept at having affairs, have the most trouble enjoying them, and suffer the most in their aftermath and Pamela Druckerman has the facts to prove it. The journalist's surprising findings include:

Voyeuristic and packed with eyebrow-raising statistics and interviews, Lust in Translation is her funny and fact-filled world tour of infidelity that will give new meaning to the phrase "practicing monogamy."


Praise For Lust in Translation: Infidelity from Tokyo to Tennessee…

"[Druckerman's] finely calibrated moral compass is matched by a reporter's knack for deft, understated description....[This] thoughtful and myth-busting study of infidelity deserves to be widely translated and read."
-The Economist

Pamela Druckerman is a former staff reporter for the Wall Street Journal, where she covered foreign affairs. She has also written for the New York Times and the Washington Post, and has appeared on the Today Show and NPR's Morning Edition, among many other outlets. She is the author of the international bestseller Bringing up Bébé and Lust in Translation, which was translated into eight languages. She has a master's degree in international affairs from Columbia University, and lives in Paris.
Loading...
or
Not Currently Available for Direct Purchase