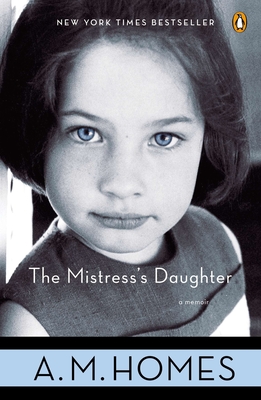 The "fierce and eloquent" (New York Times) memoir from A.M Homes, award-winning author of May We Be Forgiven and the forthcoming novel The Unfolding

The acclaimed writer A. M. Homes was given up for adoption before she was born. Her biological mother was a twenty-two-year-old single woman who was having an affair with a much older married man with a family of his own. The Mistress's Daughter is the ruthlessly honest account of what happened when, thirty years later, her birth parents came looking for her. Homes relates how they initially made contact and what happened afterwards, and digs through the family history of both sets of her parents in a twenty-first-century electronic search for self. Daring, heartbreaking, and startlingly funny, Homes's memoir is a brave and profoundly moving consideration of identity and family.

"A compelling, devastating, and furiously good book written with an honesty few of us would risk." —Zadie Smith

"I fell in love with it from the first page and read compulsively to the end." —Amy Tan

Praise For The Mistress's Daughter: A Memoir…

"A compelling, devastating, and furiously good book written with an honesty few of us would risk." --Zadie Smith

"As startling and riveting as her fiction . . . a lacerating memoir in which the formerly powerless child triumphs with the help of a mighty pen." --San Francisco Chronicle

"I fell in love with it from the first page and read compulsively to the end." --Amy Tan

"As a memoirist, A.M. Homes takes a characteristically fierce and fearless approach. And she has a whopper of a personal story to tell." --Chicago Tribune

“A.M. Homes skillfully circles and tugs at the question of what it means to live in flawed, fragile, hungry human bodies . . . DAYS OF AWE is sliced through with Homes’s dark humor . . . one wants to read passages of a Homes story aloud because they are so fine . . . DAYS OF AWE feels like the part of the day when the sun is about to go down and the light is brighter while the shadows are darker. Everything has a sharp edge, is strikingly beautiful and suddenly also a little menacing.” —Ramona Ausubel, The New York Times Book Review

“[Homes] has shown a unique penchant for cracking open the dark heart of human nature — with irreverent wit, devastating empathy and haunting shocks . . . DAYS OF AWE [is] a memorable assortment of new tales about family, love, death, and an unqualified man who somehow stumbles into becoming a populist political candidate.” —Mary Elizabeth Williams, Salon

“Homes’s keen ear for speech—surreal as her characters’ conversations often are—lends itself to varying degrees of self-aware misunderstanding, highlighting the complexity of language and the challenges . . . The impossibility of knowing another person completely is one of life’s painful truths, and [this] collection remind us of that—but [it] also shows that there are, at least, tools available to help us try.” —Vanity Fair

“Fascinating . . . I consumed these stories exactly like a spectator of a good fight or a neighbor peering through the hedge, and I felt sharply observed in turn. Homes, with her fierce sharp wit, reveals her characters’ deep flaws. No one gets away with anything and the spectacle is delightful.” —Molly Livingston, The Paris Review Daily

"With dark humor and sharp dialogue, Homes plumbs the depths of everyday American anxieties through stories about unexpected situations." —Time

“In the title story, a Holocaust survivor taps into a theme of the collection when he describes the way people hold the history of previous generations inside them. ‘We carry it with us, not just in our grandmother’s silver,’ he says, ‘but in our bodies, the cells of our hearts.’” —Wall Street Journal

MAY WE BE FORGIVEN

Winner of the 2013 Women's Prize for Fiction

“A.M. Homes has long been one of our most important and original writers of fiction. May We Be Forgiven is her most ambitious as well as her most accessible novel to date; sex and violence invade the routines of suburban domestic life in a way that reminded me of The World According to Garp, although in the end it’s a thoroughly original work of imagination.” –Jay McInerney, New York Times bestselling author of The Good Life

“I started this book in the A.M., finished in the P.M., and couldn’t sleep all night. Ms. Homes just gets better and better.” —Gary Shteyngart, New York Times bestselling author of Our Country Friends

“What if whoever wrote the story of Job had a sense of humor? Nixon is pondered. One character donates her organs.  Another tries to grow a heart.  A seductive minefield of a novel from A.M. Homes.” —John Sayles, author of A Moment in the Sun

“I started reading A.M. Homes twenty years ago. Wild and funny, questioning and true, she is a writer to go travelling with on the journey called life.” —Jeanette Winterson, New York Times bestselling author of Why Be Happy When You Could Be Normal?

IN A COUNTRY OF MOTHERS

"Homes...has the ability to scare you half to death....[She is] devastating...a very dangerous writer." —Washington Post Book World

"A commanding narrative...by turns witty and unnerving, and at times almost unbearable in its emotional intensity.” —Wall Street Journal

"Intriguing...captures a world spinning out of control....Homes is at her best evoking the pathos and obsession at the center of relationships between therapist and patient, mother and child, husband and wife. She is also wickedly funny. [This is] a psychologically gripping story.” —San Francisco Chronicle

THE SAFETY OF OBJECTS

“A moving novel, and a very refreshing one. Jack is such an engaging, attractive human being, it’s a pleasure to believe in him.” —David Foster Wallace

“The engaging, doggedly funny [Jack] is likable from the first paragraph, a good kid caught in circumstances too much for him. And in the particulars of those circumstances, A. M. Homes touches upon something unique. Ms. Homes handles the big subjects subtly, deftly and with an appealing lack of melodrama.” —The New York Times Book Review

“A. M. Homes has created a most endearing teenager, and an intensely real world around him .... A fine book.”—Hilma Wolitzer

"From her first book onward, A.M. Homes has been challenging us to look at fiction, the world, and one other as we haven’t done—because we haven’t had the nerve, the eyes, the dire and dispassionate imagination. Gripping, sad, funny, by turns aching and antic and, as always, exceedingly well-observed and written, The Unfolding opens up another one of her jagged windows, at times indistinguishable from a crack, in the world that is always unfolding, and always vanishing, around us. " -- Michael Chabon, bestselling and Pulitzer Prize-winning author of Moonglow and The Amazing Adventures of Kavalier & Clay

"A dazzling portrait of a family—and a country—in flux. A story about what happens when truths that once seemed self-evident turn out to be neither self-evident nor even true. A.M. Homes has perfectly captured an America as it lurches toward freak-out, and a family as it shreds the lies it’s been living by. The Unfolding is hilarious and shocking and heartbreaking and just a little bit deranged—in other words, it’s a book that feels like what it feels like to be alive right now." --Nathan Hill, author of The Nix

A.M. Homes was born in Washington D.C. graduated from Sarah Lawrence College and the University of Iowa, lives in New York City and teaches at Princeton University. Her work appears in ArtForum, Granta, The Guardian, McSweeney’s, Modern Painters, The New Yorker, The New York Times, Electric Literature, Playboy, and Zoetrope. She works in television, most recently as as Co-Executive Producer of Falling Water and Stephen King’s Mr. Mercedes, and is a contributing editor to Vanity Fair. She is the  recipient of awards including the Guggenheim, NEA, and NYFA fellowships. Her most recent novel, May We Be Forgiven, won the Women’s Prize for Fiction, 2013, and has been optioned for film by Unanimous Entertainment.
Loading...
or
Not Currently Available for Direct Purchase