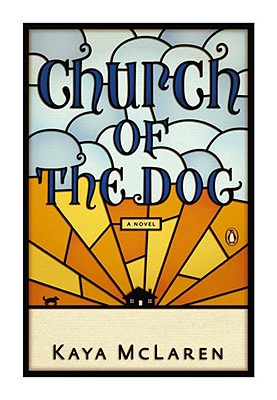 Church of the Dog

An unforgettable debut novel about finding a home, a safe haven, and family

Deep in Oregon farm country, Edith and Earl McRae are looking down the barrel of their fiftieth anniversary with none of the joy such a milestone should hold. Instead, they are stuck in a past that holds them to heartbreak and tragedy. Enter the mysterious and ever-so-slightly magical Mara O’Shaunessey who appears on their ranch with the power to mend long broken fences and show them how to recognize the enchantment of their everyday lives. Gracefully capturing the strange alchemy of people and places, Kaya McLaren’s story of redemption and rediscovery will inspire readers to find the magic and power in every day shared with the people they love.

Praise For Church of the Dog…

"Kaya McLaren's sincere and generous feelings for all the creatures of this world make this novel of comforting magic both heartfelt and heartening."
ùChristina Schwarz, author of DROWNING RUTH and ALL IS VANITY

"What a genuinely surprising novel Kaya McLaren has written, with characters that are each, in their own way, quietly magical and also heartbreakingly true. Like Barbara Kingsolver's early heroines, Mara O'Shaunnessey lives in the real world but reminds us, in all her actions, that animals can be messengers of truth and love has transformative powers."
ùCammie McGovern, author of EYE CONTACT

"CHURCH OF THE DOG is a radiant novel that honors the broken among us, tenderly healing with its love, humor, and understanding. Kaya McLaren is a deeply wonderful writer. From the opening scene of Mara in her grandmother's garden, through the wrenching finale on the ranch, I was stunned by this book. It's a classic on the spirituality of everyday life..."
ùLuanne Rice, New York Times bestselling author of LIGHT OF THE MOON

"This is a sweet, whimsical tale of love and friendship, a slice of pure life. It is a beautiful story that is not to be missed."
ùLynne Hinton, author of FRIEND:SHIP CAKE and THE ARMS OF GOD

"With prose as clear and pure as mountain water, Kaya McLaren has written a testament to the plain sense of things. CHURCH OF THE DOG is spiritual, even a little magical, but it's also incredibly practical. McLaren has a glorious way of finding beauty in the bigger picture. A lovely, uplifting book."
ùSarah Addison Allen, author of GARDEN SPELLS and THE SUGAR QUEEN

Kaya McLaren teaches art and lives on the east slope of Snoqualmie Pass in Washington state with her dog, Big Cedar. Her second novel, On the Divinity of Second Chances, will be published by Penguin in winter 2009.

If you could travel in your sleep, where would you go? What companions would you like to accompany you?

Daniel wonders if “the only way to freedom is through devastation.” He cites the Revolutionary War as a path for freedom for America, the Civil War as a path to freedom for slaves, a dam crumbling to release a river. What are some other instances where renewal comes from destruction? Are there are other ways to reach freedom and renewal? What are they?

Discuss the significance of Mara’s dual visions of her students’ futures (p. 174-175).

Mara isn’t sure she has had an impact on her students. What are your vivid memories of teachers that influenced your own life? Which ones made a positive difference in your life? Negative? How?

Daniel is angry that the funerals of his mother and father, and later, his grandfather, seem insulting to the very people they are meant to honor. Who are funerals really for, the living or the dead? Should clergy respect the varied religious traditions that might be represented or tailor services to fit only the religion of the deceased?

Edith can’t seem to give Earl’s clothes and effects away and her son’s room is still as he left it. She reflects that her mother got rid of all Edith’s father’s personal items almost immediately after his death. Which way of coping with a death do you think is healthier? Why? Are there items that remind you of people or events, things you have thought about letting go of but have not?

Mara questions Daniel about his negatives—photographic negatives, that is. What are some projects you have not seen through? Why did you abandon them? Do you think you will ever see them through to completion?

Kelli attempts to abandon her newborn with Mara and Daniel. How would you react if someone tried to leave a baby with you? Would you react in the same way that Mara and Daniel do? Could you open your home to someone who in Kelli’s situation, despite the possibility of it affecting your own life in a significant way?

In her dreams, Mara has traveled near the edge of Heaven several times. Is this aspect of Mara’s personality believable? Is Mara truly in Heaven, or is it just a construct of her own imagination? What do you picture when you think of Heaven?

Mara collects quite a few pets through the course of the novel, beginning with Harvey, her pig. What personality traits are do you look for in a dog or other sort of pet? In a friend? In what ways do they overlap? Would you consider any of your pets a guardian angel?

The author chose to use four different narrators in Church of the Dog, Mara, Earl, Edith, and Daniel. Did you find that you missed one of the characters after they stopped telling the story from their point of view? What character did you become most attached to during the course of the novel?