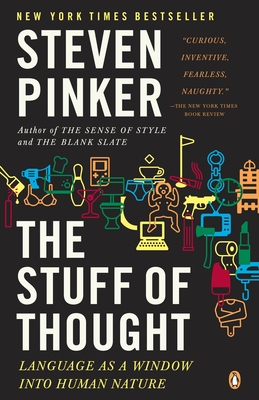 The Stuff of Thought

Language as a Window into Human Nature

This New York Times bestseller is an exciting and fearless investigation of language from the author of Rationality, The Better Angels of Our Nature and The Sense of Style and Enlightenment Now.

Bestselling author Steven Pinker possesses that rare combination of scientific aptitude and verbal eloquence that enables him to provide lucid explanations of deep and powerful ideas. His previous books - including the Pulitzer Prize finalist The Blank Slate - have catapulted him into the limelight as one of today's most important popular science writers. In The Stuff of Thought, Pinker presents a fascinating look at how our words explain our nature. Considering scientific questions with examples from everyday life, The Stuff of Thought is a brilliantly crafted and highly readable work that will appeal to fans of everything from The Selfish Gene and Blink to Eats, Shoots & Leaves.

Praise For The Stuff of Thought: Language as a Window into Human Nature…

"Pinker is a star, and the world of science is lucky to have him."
--Richard Dawkins

"An important and inviting book."
--Science

"There's plenty of stuff to think about, but a lot of fun stuff too."
-Boston Globe

Steven Pinker is the Johnstone Family professor of Psychology and Harvard College Professor of Psychology at Harvard University. A two-time Pulitzer Prize finalist and the winner of many awards for his research, teaching, and books, he has been named one of Time's 100 Most Influential People in the World Today and Foreign Policy's 100 Global Thinkers. His other books include The Better Angels of our Nature and The Blank Slate.
Loading...
or
Not Currently Available for Direct Purchase