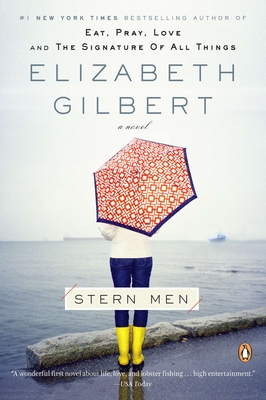 The "wonderful first novel about life, love, and lobster fishing" (USA Today) from the #1 bestselling author of Eat Pray Love, Big Magic and City of Girls

Off the coast of Maine, Ruth Thomas is born into a feud fought for generations by two groups of local lobstermen over fishing rights for the waters that lie between their respective islands. At eighteen, she has returned from boarding school-smart as a whip, feisty, and irredeemably unromantic-determined to throw over her education and join the "stern men"working the lobster boats. Gilbert utterly captures the American spirit through an unforgettable heroine who is destined for greatness-and love-despite herself in this the critically acclaimed debut.

Praise For Stern Men: A Novel…

“As humans, after all, we become that which we seek. Dairy farming makes men steady and reliable and temperate; deer hunting makes men quiet and fast and sensitive; lobster fishing makes men suspicious and wily and ruthless”. Can you think of other occupations to which this statement could apply?

The men of Fort Niles and Courne Haven have historically hated one another. How do you think the women felt?

Do you think Ruth would have grown up to be more or less the same person without Mrs. Pommeroy’s influence? What are the benefits for a woman to have a same-sex role model and/or confidante?

Ruth stubbornly declares a love of lobster fishing and island life when, in fact, she finds them both rather boring. Can you think of a situation in your own life when you loved the idea of something more than the truth of it?

In assembling the collection for his projected museum, Senator Simon tells Ruth, “It’s the common objects . . . that become rare”. What are some everyday objects that you think should become tomorrow’s artifacts and why?

How are the mudflats where Senator Simon and Webster search for the elephant’s tusk a metaphor for Ruth’s predicament? What does the tusk represent to Webster? Ruth?

Do you think Jane Smith-Ellis’s death was a suicide? Are there clues in the text that lead the reader to that conclusion? What are they?

Where do you think Ruth’s mother ought to live? To whom does she owe her greatest allegiance? What about Ruth?

Lanford Ellis sent Ruth away to school in order for her to eventually save the islands. Why did he think it was necessary for her to be educated so far away from Fort Niles?

How would the outcome of the novel change if Ruth had been born a boy?

What literary heroines does Ruth remind you of? Why is a headstrong young girl such an appealing protagonist in a novel?