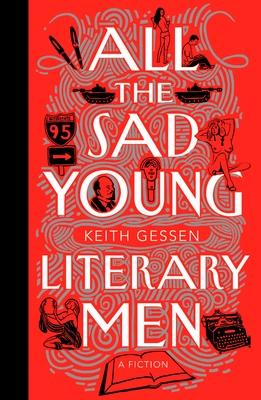 All the Sad Young Literary Men

By the author of A Terrible Country and Raising Raffi, a novel of love, sadness, wasted youth, and literary and intellectual ambition—"wincingly funny" (Vogue)

Keith Gessen is a brave and trenchant new literary voice. Known as an award-winning translator of Russian and a book reviewer for publications including The New Yorker and The New York Times, Gessen makes his debut with this critically acclaimed novel, a charming yet scathing portrait of young adulthood at the opening of the twenty-first century. The novel charts the lives of Sam, Mark, and Keith as they overthink their college years, underthink their love lives, and struggle to find a semblance of maturity, responsibility, and even literary fame.

Praise For All the Sad Young Literary Men…

“Gessen proves himself not only a capable observer but a natural novelist with a warm gun . . . [and] a nice comic sureness. . . . Gessen’s style is good-natured and ripe enough to allow a satisfying sweetness to exist in these characters.”
—Andrew O’Hagan, The New York Times Book Review (Editors’ Choice)

“Beginning with its risky yet playful title, All the Sad Young Literary Men is a rueful, undramatic, mordantly funny, and frequently poignant sequence of sketchlike stories loosely organized by chronology and place and the prevailing theme of youthful literary ideals vis-à-vis literary accomplishment. . . . Transposed to theater it would be not a conventional play in three dimensions intent upon simulating life, but an evening of linked monologues delivered with droll, deadpan humor and melancholy irony, with, perhaps from time to time, images of historic figures projected against the back of the stage. . . . The predicament of Gessen’s characters, as it is likely to be the preeminent predicament of Gessen’s generation, is the disparity between what one has learned of history and the possibilities of making use of that knowledge in one’s life.”
—Joyce Carol Oates, The New York Review of Books

“[Gessen’s] achingly comic command of the hopes, vanities, foibles, and quandaries of his peers has produced something better than fashionably maneuvered satire. It is irony (of a rare cosmopolitan sort) that this Russian-born writer brings to the New York scene, a pond that takes itself to be the ocean. He evokes the world’s culture along with our own.”
—Richard Eder, Los Angeles Times

“This interesting and agreeable first novel . . . can be good entertainment for readers, as the saying goes, of all ages . . . . A convincing portrait . . . Gessen has a deft satiric touch and a nice feel for irony.”
—Jonathan Yardley, The Washington Post

“Gessen is . . . a wunderkind of the literary scene.”
—The Houston Chronicle

“Every generation has its clever young men, and Keith Gessen must be counted among his. . . . One of the pleasures of Gessen’s novel is how well he produces the speech patterns of brainy, left-wing Ivy Leaguers—their sardonic deployment of social-theoretical jargon, their riffs on technology and capitalism, their anxiety about status.”
—Judith Shulevitz, Slate.com

“[A] humorous and compassionate handle on the minds of anxious, overanalytical grads . . . an invigorating first novel.”
—The Cleveland Plain Dealer

“Gessen’s novel is studded with self-aware observations . . . [that] captures the inner lives of these expensively educated, romantically hapless men flailing in the dark.”
—Star Tribune (Minneapolis)

“There is something weirdly fetching about All the Sad Young Literary Men—weird because the book describes such a tiny, occasionally infuriating world, one where progressive magazines and book reviews might save the world and crossing paths with the vice president’s daughter is just a part of a Harvard education. . . . And yet there is something affecting about the impossibly great aspirations shared by Mr. Gessen’s trio.”
—The New York Sun

“This book violates pretty much every principle you learned in writing school; it’s about hypereducated twentysomethings who don’t seem to have jobs or fixed locations, and who primarily engage in speculation about what might have happened between them and their ex-girlfriends. . . . ASYLM bears, in other words, the ring of truth to life as I know it, and probably as it is known by anyone reading this. It also conveys a startling amount of emotional honest and (this may be the least fictiony of all) ambivalence, as well as the occasional nicely turned phrase. It’s a good book, and for once it’s suggestive of what might be possible in contemporary fiction, rather than of what we think has been done best by those who came before.”
—Dan, Goodreads.com

“Rarely has a book pissed me off so much while simultaneously forbidding me from putting it down.”
—Caitlin, Goodreads.com

“Cruelty and affection and erudition and innocence are so perfectly balanced in these stories, they almost make me wish I were young again.”
—Jonathan Franzen, author of The Corrections and Freedom

“Before age thirty, Gessen made his mark as a public intellectual and literary critic. But his artistic debut may dwarf those other, considerable contributions. Gessen’s fiction teases out subtle insights into travails both political and romantic, and with powerful humor. Heaven will take note.”
—Mary Karr, author of Lit and The Liar's Club

“Here is a funny, felt book by a writer supremely attuned to the vagaries of love and history, or at least to the wounding abstractions that often seem like the vagaries of love and history, especially to overwound young men. The distinction, I think, lies at the heart of this powerful, surprising fiction. Whether we like it or not, Keith Gessen has written an engaged and engaging debut.”
—Sam Lipsyte, author of The Ask and Home Land

“This is one of the best new books I’ve read in a long time, engrossing and acute, with an almost classical or Fitzgeraldian excellence to the prose. I recognize our lives in it.”
—Benjamin Kunkel, author of Indecision

Keith Gessen was born in Russia and currently lives in Brooklyn. He was educated at Harvard and Syracuse. He is a founder of the magazine n+1 and translator of the National Book Critics Circle Award-winning Voices from Chernobyl. His work has also appeared in the Dissent, the New Yorker, and the New York Review of Books. All the Sad Young Literary Men is his first book.
Loading...
or
Not Currently Available for Direct Purchase