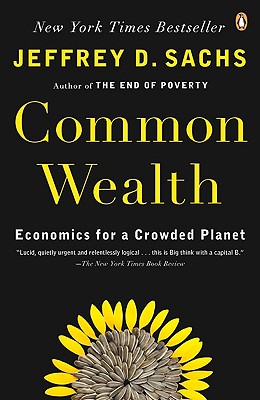 Economics for a Crowded Planet

In Common Wealth, Jeffrey D. Sachs-one of the world's most respected economists and the author of The New York Times bestseller The End of Poverty- offers an urgent assessment of the environmental degradation, rapid population growth, and extreme poverty that threaten global peace and prosperity. Through crystalline examination of hard facts, Sachs predicts the cascade of crises that awaits this crowded planet-and presents a program of sustainable development and international cooperation that will correct this dangerous course. Few luminaries anywhere on the planet are as schooled in this daunting subject as Sachs, and this is the vital product of his experience and wisdom.

Praise For Common Wealth: Economics for a Crowded Planet…

"Lucid, quietly urgent, and relentlessly logical... this is Bigthink with a capital B."
-The New York Times Book Review

"Jeffrey Sachs never disappoints. . . . This book is an excellent resource for all those who want to understand what changes the twenty-first century may bring."
-Kofi Annan, winner of the 2001 Nobel Peace Prize and former secretary-general of the United Nations

"Common Wealth explains the most basic economic reckoning that the world faces."
-Al Gore, winner of the 2007 Nobel Peace Prize and former vice president of the United States

Jeffrey D. Sachs is the Director of The Earth Institute, Quetelet Professor of Sustainable Development, and Professor of Health Policy and Management at Columbia University. He is also Special Advisor to United Nations Secretary-General Ban Ki-moon. From 2002 to 2006, he was Director of the UN Millennium Project and Special Advisor to United Nations Secretary-General Kofi Annan on the Millennium Development Goals, the internationally agreed goals to reduce extreme poverty, disease, and hunger by the year 2015. Sachs is also President and Co-Founder of Millennium Promise Alliance, a nonprofit organization aimed at ending extreme global poverty.
Loading...
or
Not Currently Available for Direct Purchase