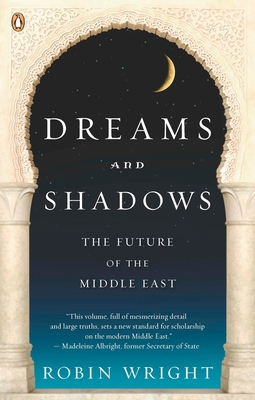 The transformation of the Middle East is an issue that will absorb-and challenge-the world for generations to come; Dreams and Shadows is the book to read to understand the sweeping political and cultural changes that have occurred in recent decades. Drawing on thirty-five years of reporting in two dozen countries-through wars, revolutions, and uprisings as well as the birth of new democracy movements and a new generation of activists-award-winning journalist and Middle East expert Robin Wright has created a masterpiece of the reporter's art and a work of profound and enduring insight into one of the most confounding areas of the world.

"If there is such a thing as a pinnacle in the landscape of international journalism, Robin Wright surely stands atop it."
-The New York Review of Books

"A thought-provoking and eminently readable look at the current and future generation of leaders in that important, politically troubled region. . . . Wright's skills at old-fashioned shoe-leather reporting are very much in evidence."
-The Boston Globe

Robin Wright is an American journalist currently covering U.S. foreign policy for The Washington Post. She has reported for The Washington Post, The Los Angeles Times, The Sunday Times (of London), CBS News and The Christian Science Monitor, and has served as a foreign correspondent in the Middle East, Europe, and Africa. She has also written for The New Yorker, The Atlantic Monthly, Foreign Affairs, Foreign Policy, The New York Times, and The International Herald Tribune.

Wright received the U.N. Correspondents Association Gold Medal for coverage of international affairs, the National Magazine Award for reportage from Iran in The New Yorker, and the Overseas Press Club Award for "best reporting in any medium requiring exceptional courage and initiative" for coverage of African wars. For coverage of U.S. foreign policy, she was named journalist of the year by the American Academy of Diplomacy for “distinguished reporting and analysis of international affairs ” and won the National Press Club Award and the Weintal Prize for diplomatic reporting. Wright has also been the recipient of a John D. and Catherine T. MacArthur Foundation grant.

Wright has been a fellow at the Carnegie Endowment for International Peace, the Brookings Institution, Yale University, Duke University, Stanford University, the University of California at Santa Barbara and the University of Southern California. She also lectures extensively around the United States and has been a television commentator on ABC, NBC, CBS, CNN and MSNBC programs, including "Meet the Press," "Face the Nation," "This Week," “Nightline," the PBS Newshour, "Frontline," and "Larry King Live."