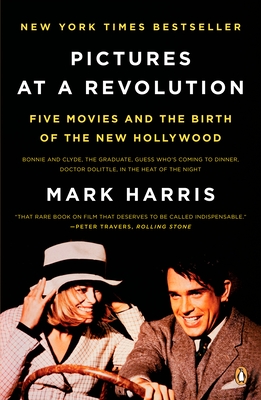 Pictures at a Revolution

Five Movies and the Birth of the New Hollywood

“Pictures at a Revolution is probably one of the best books I've ever read in my life.” —Quentin Tarantino

In the mid-1960s, westerns, war movies, and blockbuster musicals like Mary Poppins swept the box office. The Hollywood studio system was astonishingly lucrative for the few who dominated the business. That is, until the tastes of American moviegoers radically- and unexpectedly-changed. By the Oscar ceremonies of 1968, a cultural revolution had hit Hollywood with the force of a tsunami, and films like Bonnie and Clyde, The Graduate, Guess Who's Coming to Dinner, In the Heat of the Night, and box-office bomb Doctor Doolittle signaled a change in Hollywood-and America. And as an entire industry changed and struggled, careers were suddenly made and ruined, studios grew and crumbled, and the landscape of filmmaking was altered beyond all recognition.

Praise For Pictures at a Revolution: Five Movies and the Birth of the New Hollywood…

“Pictures at a Revolution is probably one of the best books I've ever read in my life.” —Quentin Tarantino

“A rarity in the world of movie literature: A first-rate, broad-gauged (and deliciously readable) cultural history.” —Richard Schickel, LA Times

“A landmark new film book . . . sifts through the evidence with reportorial acumen and great care, conjuring up the social and cultural history of a lost world and drawing on sharp new interviews with many of its major players. . . . Can take its place alongside top-shelf film industry books.” —Janet Maslin, The New York Times

From 1990 to 2006, Mark Harris worked as a writer and editor covering movies, television and books for Entertainment Weekly, where now writes the "Final Cut' back-page column. He has written about pop culture for several other magazines as well. He lives in New York City with his husband, Tony Kushner.
Loading...
or support indie stores by buying on