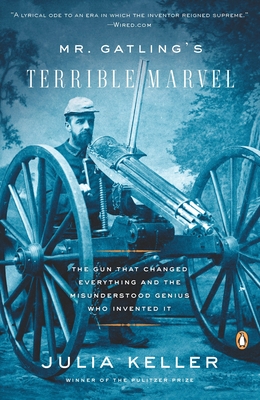 Drawing on her investigative and literary talents, Julia Keller offers a riveting account of the invention of the world's first working machine gun. Through her portrait of its misunderstood creator, Richard Jordan Gatling-who naively hoped that the overwhelming effectiveness of a multiple-firing weapon would save lives by decreasing the size of armies and reducing the number of soldiers needed to fight-Keller draws profound parallels to the scientists who would unleash America's atomic arsenal half a century later. The Gatling gun, in its combination of ingenuity, idealism, and destructive power, perfectly exemplifies the paradox of America's rise in the nineteenth century to a world superpower.

Julia Keller is a Pulitzer Prize–winning write, educator, and former journalist. Schools she has taught at include Princeton University, the University of Notre Dame, and the University of Chicago. She has served four times as a juror for the Pulitzer Prizes, and won a Pulitzer Prize of her own in 2004 for her work with the Chicago Tribune. She is the author of the nonfiction book Mr. Gatling’s Terrible Marvel and several works of fiction.
Loading...
or
Not Currently Available for Direct Purchase