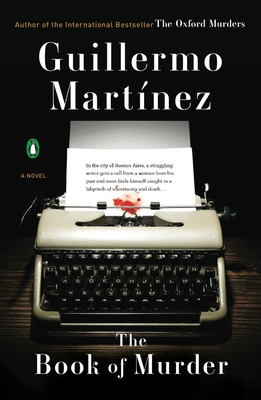 The Book of Murder

“Things are not what they seem as two writers face the same intriguing woman from their past -- and, as deaths occur in her family, novels become a haunting mirror of death. Guillermo Martinez knows just how to manipulate your thoughts, and to throw a twist at you when you least expect it. An awesome read!”
— Linda Grana, Lafayette Book Store, Lafayette, CA
View the List

When Guillermo Martínez 's novel The Oxford Murders was first published in the United States, The New York Times Book Review called it "a scholarly whodunit [for] anyone who loves a good mystery." Now Martínez returns with a worthy followup: the mesmerizing The Book of Murder. A young writer finds himself unexpectedly tangled up in the story of Luciana, his former assistant and Kloster, bestselling author and rival. What he discovers about the deaths surrounding Luciana will make him question everything he had always believed-and taken for granted-about chance and calculation, cause and effect.


Praise For The Book of Murder…

" Martinez's novel is full of explanations and parried literary thrusts, culminating in a growing sense of understanding that order and chaos aren't yin and yang but mirror images of each other."
-Los Angeles Times

" This is a clever, chilling novel that takes crime writing to a new level."
-The Sunday Times (London)

" As clever and as erudite as Borges, this is also a gripping thriller written in lucid and compelling prose."
-The Independent (London)

" This riveting tale will appeal to readers of literary fiction and thriller fans alike."
-Publishers Weekly

Guillermo Martínez was born in Argentina in 1962. Since 1985 he has lived in Buenos Aires, where he earned a PhD in mathematical science. He is the author of several highly acclaimed novels and short story collections, including the international bestseller The Oxford Murders.
Loading...
or support indie stores by buying on