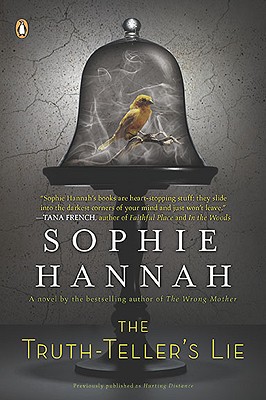 "A superbly creepy, twisty thriller” (The Times (London)) by the internationally best-selling author of The Other Woman’s House and The Wrong Mother

Naomi Jenkins knows all about secrets: three years ago something so terrible happened to her that she's never told anyone about it. Now, Naomi has another secret: her relationship with the unhappily married Robert Haworth. When Robert vanishes without explanation, Naomi knows he must have come to harm. But the police are less convinced, particularly when Robert's wife insists he is not missing. In desperation, Naomi decides that if she can't persuade the detectives that Robert is in danger, she'll convince them that he is a danger to others. Naomi knows how to describe the actions of a psychopath; all she needs to do is dig up her own traumatic past.

The second book in Sophie Hannah’s beloved Zailer and Waterhouse series, The Truth-Teller’s Lie is a chillingly smart suspense novel sure to appeal to fans of Tess Gerritsen and Gillian Flynn.

Sophie Hannah is the bestselling author of nine novels and is also an award-winning poet. Her Hercule Poirot mystery, the first to be sanctioned by the Agatha Christie estate, was published in 2014. She lives in Cambridge, England, with her husband and two children, and is a Fellow Commoner at Lucy Cavendish College.
Loading...
or support indie stores by buying on