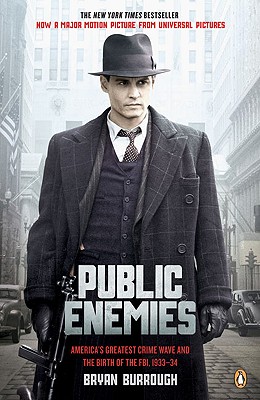 Coming in Summer 2009, the major motion picture from Universal Studios
"ludicrously entertaining" ("Time"), " Public Enemies" is the story of the most spectacular crime wave in American history, the two-year battle between the young J. Edgar Hoover and his FBI, and an assortment of criminals who became national icons: John Dillinger, Machine Gun Kelly, Bonnie and Clyde, Baby Face Nelson, Pretty Boy Floyd, and the Barkers. In an epic feat of storytelling, Burrough reveals a web of interconnections within the vast American underworld and demonstrates how Hoover's G-men secured the FBI's rise to power.

Praise For Public Enemies: America's Greatest Crime Wave and the Birth of the FBI, 1933-34…

" [A] riveting true-crime tale . . . fascinating . . . the real story, it turns out, is much better than the Hollywood version."
-The Wall Street Journal

"A rollicking yarn whose prose bounces across the page like a getaway car through a wheat field."
-Newsweek

"An amazingly detailed true-life thriller that puts us on a stakeout alongside the feds, inside the banks while bullets fly, and inevitably, next to the criminals' bloody corpses."
-Entertainment Weekly

Bryan Burrough is a special correspondent at Vanity Fair and the author of three previous books. A former reporter for the Wall Street Journal, he is a three-time winner of the John Hancock Award for excellence in financial journalism. Burrough lives in Summit, New Jersey, with his wife and their two sons.
Loading...
or
Not Currently Available for Direct Purchase