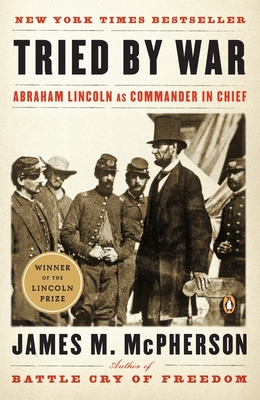 Abraham Lincoln as Commander in Chief

As we celebrate the bicentennial of Lincoln's birth, this study by preeminent, bestselling Civil War historian James M. McPherson provides a rare, fresh take on one of the most enigmatic figures in American history. Tried by War offers a revelatory (and timely) portrait of leadership during the greatest crisis our nation has ever endured. Suspenseful and inspiring, this is the story of how Lincoln, with almost no previous military experience before entering the White House, assumed the powers associated with the role of commander in chief, and through his strategic insight and will to fight changed the course of the war and saved the Union.

James M. McPherson is the George Henry Davis '86 Professor of History Emeritus at Princeton University. He is the bestselling author of numerous books on the Civil War, including Battle Cry of Freedom, which won the Pulitzer Prize, For Cause and Comrades, which won the prestigious Lincoln Prize, and Crossroads of Freedom. He lives in Princeton, NJ.
Loading...
or
Not Currently Available for Direct Purchase