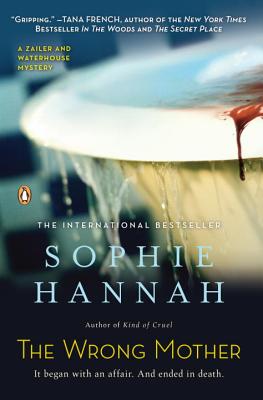 A chilling, compulsively readable novel of psychological suspense from the author of Little Face and The Carrier

Sally Thorning is watching the news with her husband when she hears a name she never thought she'd hear again: Mark Bretherick.

It's a name she shouldn't recognize. Last year, a work trip Sally had planned was canceled at the last minute. Desperate for a break from juggling her job and a young family, Sally didn't tell her husband that the trip had fallen through. Instead, she treated herself to a secret vacation in a remote hotel. While she was there, Sally met a man—Mark Bretherick. All the details are the same: where he lives, his job, his wife Geraldine and daughter Lucy. Except that the photograph on the news is of a man Sally has never seen before. And Geraldine and Lucy Bretherick are both dead...

With the international bestseller Little Face, Sophie Hannah established herself as a striking new voice in psychological suspense. The Wrong Mother, a riveting exploration of a mother's unspeakable betrayal, confirms her reputation as a master of the form.

"Shockingly (and refreshingly) blunt riffs about the violent emotions of motherhood and the familial yearnings of men, along with chilling and darkly funny revelations about lust and loyalty, make this novel one of the season's most absorbing reads."—O, The Oprah Magazine

"Gripping... It's like watching a nightmare come to life."—Tana French, New York Times bestselling author of In the Woods

"Paced like a ticking time bomb with flawlessly distinct characterization, this is a fiercly fresh and un-put-downable read."—Publishers Weekly (starred review)

"Sophie Hannah just gets better and better. Her plots are brilliantly cunning and entirely unpredictable. The writing is brilliant and brings us uncomfortably close to the dark, ambivalent impulses experienced by the parents of difficult, demanding children."—The Guardian (London)

Sophie Hannah is the internationally bestselling author of nine psychological thrillers, which have been more in twenty countries. Her Hercule Poirot mystery, the first to be sanctioned by the Agatha Christie estate, was published in 2014. Hannah is an Honorary Fellow of Lucy Cavendish College, Cambridge, and as a poet has been shortlisted for the TS Eliot Prize. She lives in Cambridge, England, with her husband and two children.

Who is the “wrong mother” referred to in the novel’s title?

Which character in the novel did you most identify with and why?

Why is it important to voice the negative aspects of parenthood as well as the positive?

Did Sally and Nick do the right thing by selling the home they loved to move somewhere they hated in order to allow their children to attend a good school? Is that kind of sacrifice something that ultimately hurts or benefits a child?

Would Sally have been tempted to have an affair if she and Nick had remained childless? Should she confess her infidelity to Nick?

It is ironic that Sally’s job involves preserving Venice from sinking into the sea when she herself is barely able to keep emotionally afloat. Are there any other instances in which the author employs metaphor to illustrate a point?

What is Pam Senior’s role in the novel?

Should mothers be able to take vacations from mothering?

Did Encarna invite her own fate? Consider the lengths to which Jon went to protect his daughter’s good name: was he merely driven insane by their deaths, or was he trying to do something honorable?

Cordy is the only character whose family remains unscathed by the madness that unfolds around her. Is it her selfishness or just luck that ultimately preserves Oonagh?

If it is at all possible to compare two unspeakable horrors, which crime is worse—a mother who kills a child or a child who kills his or her mother?

Is Amy’s chronic lying evidence of her unhappiness at home? If so, to what would you attribute Lucy’s ruthless honesty? Do parents generally accept too much blame for their children’s unsavory attributes or not enough?