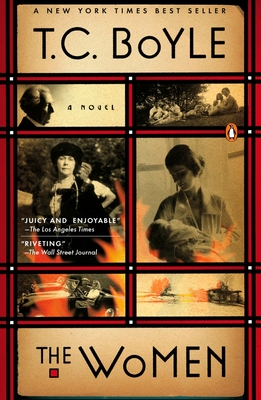 Having brought to life eccentric cereal king John Harvey Kellogg in The Road to Wellville and sex researcher Alfred Kinsey in The Inner Circle, T.C. Boyle now turns his fictional sights on an even more colorful and outlandish character: Frank Lloyd Wright. Boyle's incomparable account of Wright's life is told through the experiences of the four women who loved him. There's the Montenegrin beauty Olgivanna Milanoff, the passionate Southern belle Maude Miriam Noel, the tragic Mamah Cheney, and his young first wife, Kitty Tobin. Blazing with his trademark wit and inventiveness, Boyle deftly captures these very different women and the creative life in all its complexity.

Praise For The Women: A Novel…

"Wonderfully entertaining . . . In his inexhaustible capacity to beguile us as a natural storyteller, T.C. Boyle is surely one of our most American novelists since Mark Twain, and one of our very best."
--The Boston Globe

"Despite dozens of writers' attempts to capture Wright's story, it seems safe to say that none have rendered it with more crackling life than Mr. Boyle."--The Wall Street Journal

"Boyle at his best . . . Love, not architecture, is the focus here. . . . A mesmerizing story of women who invest everything, at great risk, in that mysterious 'bank of feeling' named Frank Lloyd Wright. . . . Boyle doesn't just fiddle around with familiar autobiographical material. He inhabits the space of Wright's life and times with particular boldness."
--The New York Times Book Review

T.C. Boyle is an American novelist and short story writer. Since the late 1970s, he has published sixteen novels, most recently The Terranauts and The Harder They Come, and ten collections of short stories. He won the PEN/Faulkner award in 1988 for his novel World’s End, and the Prix Médicis étranger for The Tortilla Curtain in 1995; his 2003 novel Drop City was a finalist for the National Book Award. His honors include the PEN/Malamud Award for Excellence in Short Fiction, the Henry David Thoreau Prize for excellence in nature writing, and the Rea Award for the Short Story.  He is Distinguished Professor of English at the University of Southern California and lives in Santa Barbara.