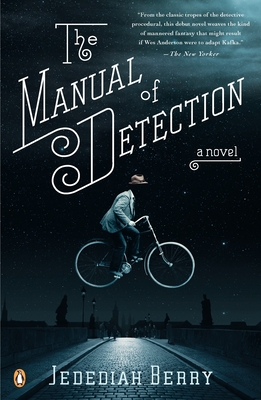 The Manual of Detection

“This story of a clerk becoming an unlikely detective is the perfect novel noir, like some wonderful, early black-and-white film from France or Germany. The mystery twists and turns, and the universe grows into a beautiful web of fantasy. The Manual of Detection is the most fun circus ride I've been on in years.”
— Justin Fetterman, The Alabama Booksmith, Birmingham, AL
View the List

"This debut novel weaves the kind of mannered fantasy that might result if Wes Anderson were to adapt Kafka." --The New Yorker

Reminiscent of imaginative fiction from Jorge Luis Borges to Jasper Fforde yet dazzlingly original, The Manual of Detection marks the debut of a prodigious young talent. Charles Unwin toils as a clerk at a huge, imperious detective agency located in an unnamed city always slick with rain. When Travis Sivart, the agency's most illustrious detective, is murdered, Unwin is suddenly promoted and must embark on an utterly bizarre quest for the missing investigator that leads him into the darkest corners of his soaking, somnolent city. What ensues is a noir fantasy of exquisite craftsmanship, as taut as it is mind- blowing, that draws readers into a dream world that will change what they think about how they think.

Praise For The Manual of Detection: A Novel…

Jedediah Berry’s short fiction has appeared in numerous journals and anthologies, including Best New American Voices and Best American Fantasy. He lives in Northampton, Massachusetts, where he works as assistant editor of Small Beer Press.
Loading...
or
Not Currently Available for Direct Purchase