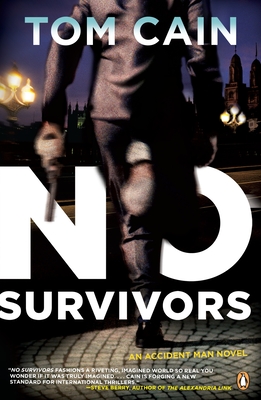 “I've been waiting for Cain's second book and the wait was well worth it! Samuel Carver, who gets paid to make bad things happen, takes on jobs that are dangerous and ugly, and Tom Cain's latest brilliantly conceived with explosive action, a plausible plot, and a very likable Carver. Outstanding!”
— Susan Wasson, Bookworks, Albuquerque, NM
View the List

Tom Cain's The Accident Man introduced Samuel Carver-a man hired to make bad things happen-to rave reviews from critics and readers alike. Now, Carver is back in a new adventure that takes him from the war rooms of Washington, D.C., and the palaces of the French Riviera to the Arctic peaks of Norway and the war-torn Serbian countryside.

Carver finds himself lying broken and damaged in a Swiss sanitarium after rescuing his lover, Alix Petrova, from her Russian spymaster. But when Alix's former employers force her to leave him and seduce an American military official, Carver emerges, shockingly and violently, as his former self-just in time to discover a Texas billionaire's messianic plot to destroy the world.

Tom Cain is the pseudonym of an award-winning journalist, with 25 years’ experience working for Fleet Street newspapers, as well as major magazines in Britain and the US. During the course of his career he has conducted in-depth interviews with senior politicians, billionaire entrepreneurs, Olympic athletes, movie stars, supermodels and rock legends. He has investigated financial scandals on Wall Street, studio intrigues in Hollywood and corrupt sports stars in Britain. The first Western journalist to cross the border into Serbia after the US bombing campaign of 1999, he has lived in Moscow, Washington, D.C. and Havana, Cuba. He edited four magazines, published over a dozen books, wrote film-scripts and was translated into some 20 languages, before beginning the ‘Accident Man’ series of thrillers. No Survivors continues the story of Samuel Carver, a former British special forces officer who now ‘does very bad things to even worse people.’

Tom Cain lives with his family in Sussex, England. In his spare time he is a fanatical supporter of West Ham United FC and the Washington Redskins; a fan of 24, Life on Mars, Flashman, Elmore Leonard, Oldboy and The Black Book; a lousy guitarist but a half-decent singer; and an enthusiastic, but unsubtle gardener.

Canadian readers may be interested to hear that Tom Cain is the brother-in-law of Steven Erikson, the Vancouver-based author of the ‘Mazalan Book of the Fallen’ series of fantasy novels.