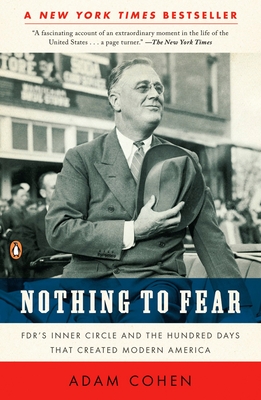 "A fascinating account of an extraordinary moment in the life of the United States." --The New York Times

With the world currently in the grips of a financial crisis unlike anything since the Great Depression, Nothing to Fear could not be timelier. This acclaimed work of history brings to life Franklin Roosevelt's first hundred days in office, when he and his inner circle launched the New Deal, forever reinventing the role of the federal government. As Cohen reveals, five fiercely intelligent, often clashing personalities presided over this transformation and pushed the president to embrace a bold solution. Nothing to Fear is the definitive portrait of the men and women who engineered the nation's recovery from the worst economic crisis in American history.

Praise For Nothing to Fear: FDR's Inner Circle and the Hundred Days That Created Modern America…

Adam Cohen is assistant editorial page editor of The New York Times, where he has been a member of the editorial board since 2002. He was previously a senior writer at Time and is the author of The Perfect Store: Inside eBay and a coauthor of American Pharaoh, a biography of Mayor Richard J. Daley. Before entering journalism, Cohen was an education-reform lawyer, and he has a law degree from Harvard.
Loading...
or
Not Currently Available for Direct Purchase