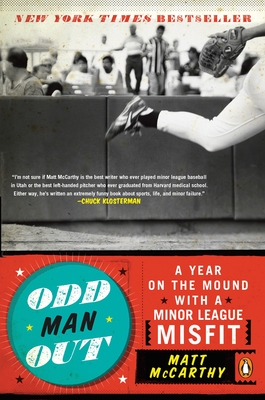 A Year on the Mound with a Minor League Misfit

A hilairious inside baseball account of year in the minor leagues

Odd Man Out captures the gritty essence of our national pastime as it is played outside the spot­light. Matt McCarthy, a decent left-handed starting pitcher on one of the worst squads in Yale history, earned a ticket to spring training as the twenty-sixth-round draft pick of the 2002 Anaheim Angels. This is the hilarious inside story of his year with the Provo Angels, Anaheim's minor league affiliate in the heart of Mormon country, as McCarthy navigates the ups and downs of an antic, grueling season, filled with cross-country bus trips, bizarre rivalries, and wild locker-room hijinks.

Praise For Odd Man Out: A Year on the Mound with a Minor League Misfit…

"His well-told, insightful memoir should brighten the off-season for serious baseball fans. It provides a colorful, inside look at the distinctly unglamorous life of the minor-league ballplayer, complete with shabby hotels, 17-hour bus rides and little hope of making it to the majors. " --Kirkus Reviews


'While his professional baseball career lasted for just one summer, McCarthy still compiled enough incidents and anecdotes to make for an eye-opening read about the wildly unpredictable life of a minor-league ballplayer." -- Publishers Weekly

Matt McCarthy left professional baseball in 2003 and enrolled in medical school at Harvard University. He is an intern at Columbia-Presbyterian Medical Center in New York City.
Loading...
or
Not Currently Available for Direct Purchase