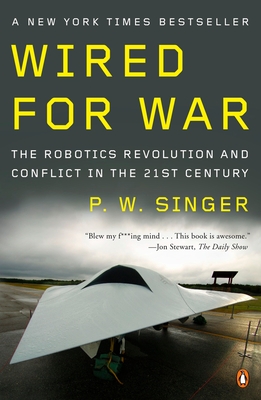 P. W. Singer explores the great­est revolution in military affairs since the atom bomb: the dawn of robotic warfare

We are on the cusp of a massive shift in military technology that threatens to make real the stuff of I, Robot and The Terminator. Blending historical evidence with interviews of an amaz­ing cast of characters, Singer shows how technology is changing not just how wars are fought, but also the politics, economics, laws, and the ethics that surround war itself. Travelling from the battlefields of Iraq and Afghanistan to modern-day "skunk works" in the midst of suburbia, Wired for War will tantalise a wide readership, from military buffs to policy wonks to gearheads.

Dr Singer is considered one the world's leading experts on changes in 21st century warfare. He has written for the full range of major media and journals, including Boston Globe, L.A. Times, New Times, amongst many others. He is also the author of Corporate Warriors: The Rise of the Privatized Military Industry and Children at War. He is also a founder and organizer of the US-Islamic World Forum, a global conference that brings together leaders from across the US and the Muslim world.

Praise For Wired for War: The Robotics Revolution and Conflict in the 21st Century…