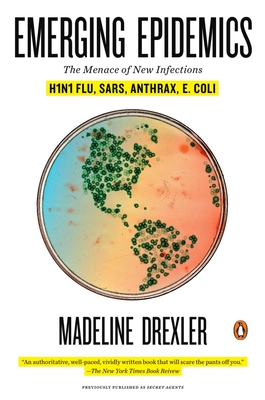 The Menace of New Infections

As timely as it is urgent, the well-researched book from veteran science journalist Madeline Drexler delivers a compelling report about today's most ominous infections disease threats. Focusing on a different danger in each chapter-from the looming risk of lethal influenza to in-depth information on the public health perils posed by bioterrorism-Drexler takes readers straight to the front lines, where scientists are racing to catch nearly invisible adversaries superior in speed and guile. Drawing on a powerful combination of fresh research and surprising history, she warns us that the most ceaselessly creative bioterrorist is still Mother Nature, whose microbial operatives are all around us, ready to ounce whenever conditions are right.

Madeline Drexler is a science and medical journalist. Formerly a medical columnist for The Boston Globe Magazine, she was a 1996-1997 Knight Science Journalism Fellow at MIT. She was awarded the 1992 International Biomedical Science Journalism Prize by the General Motors Cancer Research Foundation. Her articles have appeared in The New York Times, The American Prospect, Self, Good Housekeeping, and many other national publications.

Praise For Emerging Epidemics: The Menace of New Infections…