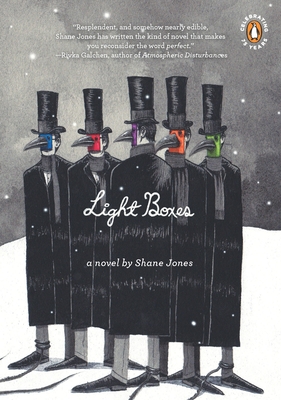 A poignant and fantastical first novel by a timeless new literary voice.

With all the elements of a classic fable, vivid descriptions, and a wholly unique style, this idiosyncratic debut introduces a new and exciting voice to readers of such authors as George Saunders, Kurt Vonnegut, and Yann Martel.

In Light Boxes, the inhabitants of one closely-knit town are experiencing perpetual February. It turns out that a god-like spirit who lives in the sky, named February, is punishing the town for flying, and bans flight of all kind, including hot air balloons and even children's kites. It's February who makes the sun nothing but a faint memory, who blankets the ground with snow, who freezes the rivers and the lakes. As endless February continues, children go missing and more and more adults become nearly catatonic with depression. But others find the strength to fight back, waging war on February.

Praise For Light Boxes: A Novel…

"Resplendent, and somehow nearly edible, Shane Jones has written the kind of novel that makes you reconsider the word perfect."
-Rivka Galchen, author of Atmospheric Disturbances

"At last, a book that cries out to our inner balloonists. Shane Jones has built a fable that is fresh and surprising, but also familiar in the way that the oldest stories are familiar."
-Jedediah Berry, author of The Manual of Detection

"Reading this book makes you realize what our American literature has been missing. Wholly original, tremendously imaginative, written with the deftest hand, Light Boxes makes sense of modern life in the way only dreams can."
-Joe Meno, author of Hairstyles of the Damned

"[T]his literary gem of metaphysical malaise has that ideally weird blend of offputting sensualism and heartfelt emotion-just the sort of thing to ensure a dedicated, if limited, following."
-Booklist

Shane Jones was born in February of 1980. His poetry and short fiction have appeared in numerous literary journals, including New York Tyrant, Unsaid, Typo, and Pindeldyboz. He lives in upstate New York. This is his first novel.
Loading...
or
Not Currently Available for Direct Purchase