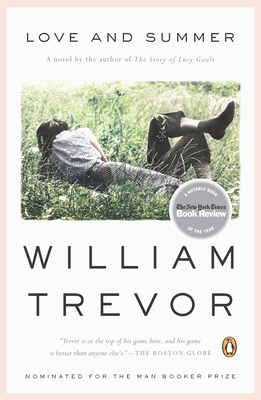 “William Trevor's novel of forbidden, secret love in a small Irish town is sad, beautiful, deeply felt, and replete, as always, with gorgeous writing. I loved this story this so much.”
— Maria Roden, Orinda Books, Orinda, CA
View the List

In spare, exquisite prose, master storyteller William Trevor presents a haunting love story about the choices of the heart, and the passions and frustrations of three lives during one long summer. Ellie is a shy orphan girl from the hill country, married to a man whose life has been blighted by an unspeakable tragedy. She lives a quiet life in the Irish village of Rathmoye, until she meets Florian Kilderry, a young photographer preparing to leave Ireland and his past forever. The chance intersection of these two lost souls sets in motion a poignant love affair that requires Ellie to make an impossible choice.

William Trevor was born in Mitchelstown, County Cork, and spent his childhood in provincial Ireland. He studied at Trinity College, Dublin. He is the author of twenty-nine books, including Felicia’s Journey, which won the Whitbread Book of the Year Award and was made into a motion picture, and The Story of Lucy Gault, which was shortlisted for both the Man Booker Prize and the Whitbread Fiction Prize. In 1996 he was the recipient of the Lannan Award for Fiction. In 2001, he won the Irish Times Literature Prize for fiction. Two of his books were chosen by The New York Times as best books of the year, and his short stories appeared regularly in The New Yorker. In 1997, he was named Honorary Commander of the British Empire.
or support indie stores by buying on
Copyright © 2020 American Booksellers Association