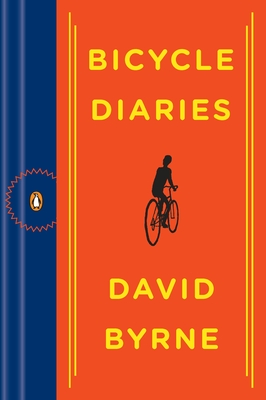 “Bicycle Diaries is a fascinating look at what we can learn about cities if we slow down, get out of the car, and look around. Byrne has written a meditation on the impact of suburbanization and car culture, and a celebration of what makes cities unique, even as they change and grow (or die). He is a wonderful travel companion, and his book not only encourages people to hop on and take off to places unknown but demonstrates that many of those places are right around the corner from where we live.”
— Karen Maeda Allman, The Elliott Bay Book Company, Seattle, WA
View the List

A round-the-world bicycle tour with one of the most original artists of our day.

Urban bicycling has become more popular than ever as recession-strapped, climate-conscious city dwellers reinvent basic transportation. In this wide-ranging memoir, artist/musician and co-founder of Talking Heads David Byrne--who has relied on a bike to get around New York City since the early 1980s--relates his adventures as he pedals through and engages with some of the world's major cities. From Buenos Aires to Berlin, he meets a range of people both famous and ordinary, shares his thoughts on art, fashion, music, globalization, and the ways that many places are becoming more bike-friendly. Bicycle Diaries is an adventure on two wheels conveyed with humor, curiosity, and humanity.

"Whether you are a cyclist or not, Byrne's insights into everything from outside art to aboriginal folklore are wry, witty, and more often than not, wise as well."
--The Philadelphia Inquirer

"Mr. Byrne’s music has every year grown more receptive to other cultures, and his diaries reflect the same ecumenicism." -- The New York Times

A cofounder of the musical group Talking Heads, David Byrne has also released several solo albums in addition to collaborating with such noted artists as Twyla Tharp, Robert Wilson, and Brian Eno. His art includes photography and installation works and has been published in five books. He lives in New York and he recently added some new bike racks of his own design around town, thanks to the Department of Transportation.
Loading...
or support indie stores by buying on