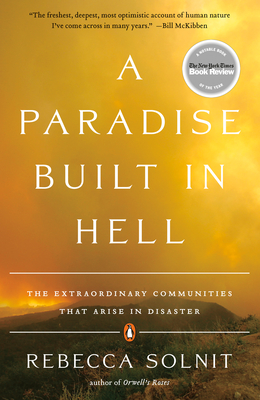 A Paradise Built in Hell

The Extraordinary Communities That Arise in Disaster

“Solnit argues that disasters are opportunities as well as oppressions, each one a summons to rediscover the powerful engagement and joy of genuine altruism, civic life, grassroots community, and meaningful work.” —San Francisco Chronicle

A stirring investigation into what happens in the aftermath of disaster, from the author of Orwell's Roses

The most startling thing about disasters, according to award-winning author Rebecca Solnit, is not merely that so many people rise to the occasion, but that they do so with joy. That joy reveals an ordinarily unmet yearning for community, purposefulness, and meaningful work that disaster often provides. A Paradise Built in Hell is an investigation of the moments of altruism, resourcefulness, and generosity that arise amid disaster's grief and disruption and considers their implications for everyday life. It points to a new vision of what society could become-one that is less authoritarian and fearful, more collaborative and local.

Praise For A Paradise Built in Hell: The Extraordinary Communities That Arise in Disaster…

Praise for A Paradise Built in Hell:

“Everyone feels alone in a crisis . . . It needn’t be that way. In fact, as the incomparable Rebecca Solnit has shown throughout her long, meandering, brilliant career, but especially in [this book], it must not be. A Paradise Built in Hell is an eye-opening account of how much hope and solidarity emerges in the face of sudden disaster . . . [These lessons] offer deep comfort now, as antidotes not just to feelings of helplessness but loneliness.”
—David Wallace-Wells, New York Magazine

“[An] expansive argument about human resilience . . . Though Solnit mobilizes decades of sociological research to support her argument, the chapters themselves move effortlessly through subtle philosophical readings and vivid narrations.”
—The New Yorker

“What will it be like to live not on the relatively stable planet that civilization has known throughout the ten thousand years of the Holocene, but on the amped-up and careening planet we’re quickly creating? With her remarkable and singular book, A Paradise Built in Hell, Rebecca Solnit has thought harder about the answer to that question than anyone else. Her answer is strangely and powerfully hopeful.  As she proves with inspired historiography, disasters often produce remarkable temporary communities—paradises of a sort amid the rubble, where people, acting on their own and without direction from the authorities, manage to provide for each other.”
—Bill McKibben, The New York Review of Books

“Stirring . . . fascinating . . . presents a withering critique of modern capitalist society by examining five catastrophes . . . Her account of these events are so stirring that her book is worth reading for its storytelling alone. . . . [An] exciting and important contribution to our understanding of ourselves.”
—The Washington Post

Rebecca Solnit is the author of numerous books, including Hope in the Dark, River of Shadows: Eadweard Muybridge and the Technological Wild West, Wanderlust: A History of Walking, and As Eve Said to the Serpent: On Landscape, Gender, and Art, which was nominated for the National Book Critics Circle Award in Criticism. In 2003, she received the prestigious Lannan Literary Award.
Loading...
or support indie stores by buying on
(This book is on backorder)