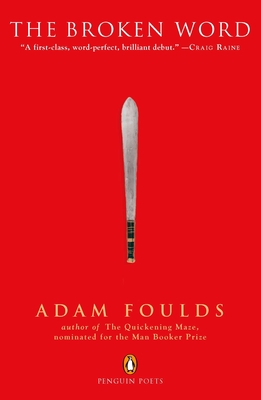 An Epic Poem of the British Empire in Kenya, and the Mau Mau Uprising Against It (Penguin Poets)

The stunning debut from "one of the best British writers to emerge in the past decade." (Julian Barnes)

With a voice that is at once fierce and lyrical, Adam Foulds tells the story of the Mau Mau uprising against British colonial rule in 1950s Kenya. Tom, a young man who has returned to his family's farm, rapidly becomes caught up in the intensifying events of violence and brutality in a conflict Foulds illustrates as both utterly contemporary and yet deeply burdened by the history of race and empire in this region. The Broken Word was the recipient of the Costa (Whitbread) Poetry Award, and Foulds's The Quickening Maze was a finalist for the Man Booker Prize.

Adam Foulds was born in 1974, graduated Oxford University, took a creative writing MA at the University of East Anglia, and now lives in South London. His book-length narrative poem, THE BROKEN WORD, was shortlisted for a number of awards, including the John Llewellyn Rhys Prize, and won the 2008 Whitbread Costa Poetry Award. His first novel, THE TRUTH ABOUT THESE STRANGE TIMES, was published in 2007 and he was named Sunday Times Young Writer of the Year in 2008. Penguin will publish THE BROKEN WORD in winter 2011.
Loading...
or
Not Currently Available for Direct Purchase