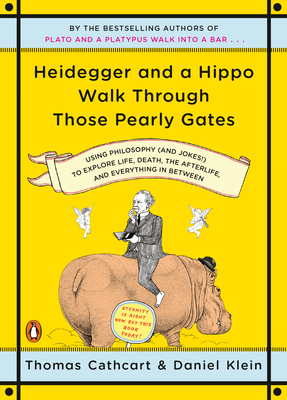 Heidegger and a Hippo Walk Through Those Pearly Gates

Using Philosophy (and Jokes!) to Explore Life, Death, the Afterlife, and Everything in Between

Q. Why are there almost as many jokes about death as there are about sex?

A. Because they both scare the pants off us.

Thomas Cathcart and Daniel Klein first made a name for themselves with the outrageously funny New York Times bestseller Plato and a Platypus Walk into a Bar.... Now they turn their attention to the Big "D" and share the timeless wisdom of the great philosophers, theologians, psychotherapists, and wiseguys. From angels to zombies and everything in between, Cathcart and Klein offer a fearless and irreverent history of how we approach death, why we embrace life, and whether there really is a hereafter. As hilarious as it is enlightening, Heidegger and a Hippo Walk Through Those Pearly Gates is a must-read for anyone and everyone who ever expects to die.

And now, you can read Daniel Klein's further musings on life and philosophy in Travels with Epicurus and Every Time I Find the Meaning of Life, They Change it.

Thomas Cathcart and Daniel Klein pursued the usual careers after majoring in philosophy at Harvard. Tom has worked with street gangs in Chicago, doctors at Blue Cross Blue Shield, and has dropped out of various divinity schools. Daniel has written several novels and nonfiction books as well as jokes for comedians like Flip Wilson and Lily Tomlin. Daniel Klein lives in Massachusetts, and Thomas Cathcart lives in New York City.
Loading...
or support indie stores by buying on